The rhinoceros is an amazing creature, which has dominated many ecosystems on this planet for millennia. It has evolved from hundreds of subspecies, and adapted to innumerable ecological changes over its reign. The Indian rhino currently holds its place as the second largest rhinoceros on planet Earth. The first is the White rhinoceros. The story of the rhino is long, has a very sad ending. Most species of rhino today are nearly extinct, largely due to irresponsible hunting or poaching operations, and rapidly shrinking habitats. Only five distinct species of rhinoceros exist today, and most of those exist only in wildlife reserves sectioned off and designed for them.

Of the five surviving rhino species, only two of those still exist in their natural habitat. The javan rhino has been listed as functionally extinct, and only some of those has been spotted in a wildlife reserve. Only footprints, wallows, and scrapings have been located to suggest the javan still walks the face of the Earth. Sumatran rhinos are also very nearly gone, only a few remaining in national parks. The few that remain are far flung and still in danger of hunters.

The white and Indian rhinos have a slight leg up as grazers, in relation to the conservation efforts, and are presently listed as Vulnerable. This means that they are existing in wildlife reserves, zoos, and in their natural habitats, in small numbers. The conservation efforts used to keep these two subspecies alive have done a fantastic job, bringing the population back to manageable levels. To protect against poaching, the Indian rhinos in a reserve may have armed guards.

The black rhino has only continued to decline in captivity, and continue to be the object of poachers and hunters to this day. At least three subspecies of black rhino have become extinct forever. Conservationists currently list the black rhino as critically endangered, and the animal has been listed as nationally and regionally extinct in many nations. 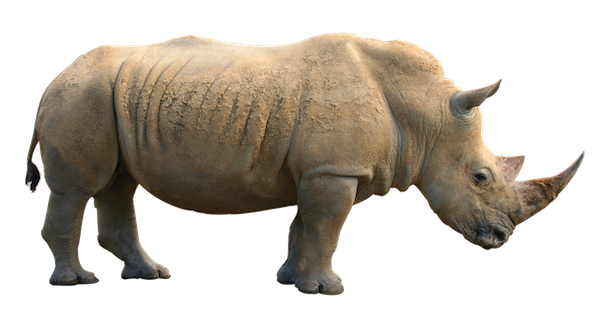 The rhinos’ most lauded feature to humans has been its horn. The horn of a rhinoceros is made up of the mineral keratin, the same substance that can be found in human hair and nails. Rhinos use their horns for combat, defense, and as a tool to aid in feeding. This horn is the most common reason the rhino is poached illegally. Most nations have staunch policies against hunting the rhino for its horn, but the penalties have only raised the demand for this object.

The rhinos’ skin is layered with subcutaneous fat, to help it stay cool during the hottest part of the day. This skin has also been the prize of many poachers, and has been known to show up on the black market. Their skin is extremely hard and thick, and the rhino uses it as protection against sharp foliage and the occasional predator attack. The Indian rhinos’ skin is especially thick and hearty, and is covered in wart like notches.

The lips of the rhino are also used to distinguish the five species. Only the black rhino still has the pointed lip structure better suited to browsing, and breaking off large pieces of foliage for eating. The black rhino is also known as the hook lipped rhino because of this feature. Most other rhinoceros have square lips, which are more useful as grazing devices. The white rhino is characterized by this feature, and uses this lip to cut grasses and shrubs.

Rhinos have many interesting and varied habits that belie their long evolutionary lifetime. Many rhinos even use a rudimentary form of vocal communication, exchanging grunts and snorts when gathered at the same wallow or salt lick. African rhinos are also one of the many creatures that participates in watering hole right sharing. They will often use the same paths as, and seemingly react to, elephants. These relationships rarely go any further than a few sniffs, but other large mammals tend to react more violently than this. 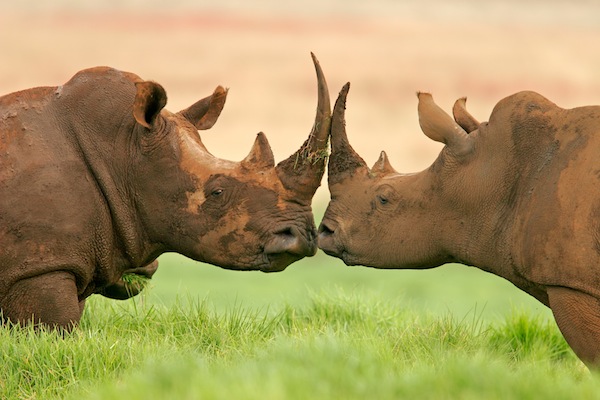 Salt licks are important to the rhino’s digestive and developmental health. Rhinos seem to need certain quantities of salt and other minerals found in the lick to maintain microorganisms in their stomach. These animals, while generally territorial, seem to be much friendlier towards other rhinoceros’ in these places.

The rhino must also wallow in the mud, like most other large land mammals, to keep cool. They often use their horns to dig large trenches to fit their mass. Rhinos are also much more friendly when wallowing, and tend to react more violently when disturbed.

Rhinos may let a human up to thirty feet away from them, due to poor eyesight, which may have been why they were so easy to hunt to near extinction. Today, it is not advised to approach a rhinoceros, as they may become violent as a survival response.