Threats And Conservation Status Of The Rhino

All sub species of rhinoceros have been the target of poachers and deforestation, rapid changes in our natural environments that the rhino was never equipped to handle. Poachers and hunters decimated some populations of this creature to mere fragments, some as few as fifty, some species, becoming completely extinct. Late in the degeneration of their population, humanity has stepped in on the behalf of the rhino, and most surviving members are kept in reserves, protected by anti-poaching forces.

In some of these conservation areas, there are armed guards to keep them as secure as possible. Even still, populations are dwindling, and the rhino may never be suited to return to its natural environment. Here is some information on the status of eat species of rhino, and the threats they have experienced.

Ten years ago, only fifty or so black rhinos had survived. A heavy target for poachers for their prized horn, the black rhino was once the most prolific species of this creature. Eight different subspecies of black rhino have been reported and discovered, but only five of those are still active. The other four have been labeled as extinct and most black rhinos have been listed as regionally extinct for most of the twentieth century. Today, conservation societies have brought the population of black rhinos back up to about fourteen thousand, under the watchful eye of human protection.

Presently, it is estimated that about sixteen thousand white rhinos exist in the wild. These are exclusively the southern white rhino that have survived, as their northern cousin was listed as functionally extinct in wild in 2007. The white rhino was almost hunted to extinction for their prized horns, but also for the immense amount of meat they provide. The white rhino is one of the few species that propagates in captivity, making them one of the most suited for survival in modern times. They are presently listed as near threatened, and may present the largest population of rhinos still alive.

Illegal poaching operations and rapid deforestation has reduced the population of Sumatran rhinos to about three hundred. The population is now so diminished that the creatures are suffering from inbreeding depression, as well as many other genetic anomalies. Because of their skittish nature, it has been difficult to observe and protect these animals in the wild. Today, most Sumatran rhinos live in secluded reservations, guarded to the last. It is speculated that these creatures will be extinct in a decade or less, even with current conservation methods. 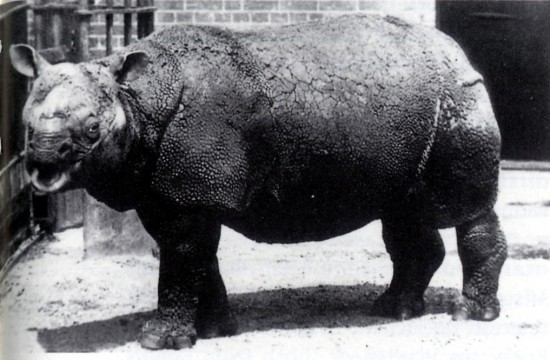 The javan rhino exists today in only one national park. Poaching and over hunting for the hide and horn of the creature has led this creature to gradual extinction. Only seventeen females have been recorded in even this national park. While agriculture and deforestation played a role in the initial downfall of this species of rhino, hunting was the primary method of execution in this instance. They are currently listed critically endangered, but have been listed as regionally extinct in many countries. The javan rhinoceros is another species that will not likely see another decade, and can never be reintroduced to their natural environments.

Like its cousin species, the Indian rhino was hunted to near extinction for its horn. They have been difficult to breed and manage in captivity, but conservationists have brought the population back to manageable levels. It is currently listed as vulnerable to extinction, but has made an inspiring turn toward repopulating. Three public conservation societies maintain small breeding groups for this rhinoceros, and have returned them to genetic viability.