Many people are under the assumption there are just ‘rhinos.’ There are, in fact, several different sub-species of rhino. Here is a closer look at the differences in rhino species.

The larger of the two African rhinoceros breeds, the white rhino is characterized by its flat lower lip and immense size. Like its cousin, the black rhino, their given names color distinction is likely a corruption of the rhino’s native name. These rhinos are usually gray, or brown depending on the age and soil types near their home territory. The white rhinoceros has two horns, which they use for combat and territorial markings. They are the second largest land mammal on Earth, and are near threatened conservation status.

One of the largest species of rhino, the greater one-horned, or Indian, is characterized by its skin folds that look like armor, flat lips used for grazing, and size. They have only one horn, which they use to dig wide wallows during the heat of the day. They use their sharp incisors for combat and to eat certain plants. The Indian rhinos are gray in coloration, but can be brown or tan depending on the soil types in their area. It is the fifth largest land largest land mammal. They are listed as vulnerable conservation status.

The smaller of the African rhinoceros, the hook-lipped, or black, rhino is identified by its smaller stature, and two, sometimes three, horns. This rhino uses its horn for combating other bull-males and digging wallows. This rhino is usually brown or gray depending on soil conditions. They have thick, powerful skin to protect against rough foliage and the occasional predator attack. The black rhino is critically endangered, and three subspecies have been identified as extinct. They share a symbiotic relationship with the oxpeckers and egrets, which eat parasites that attach themselves to the rhino. They are a curious species, and are known to charge into things as a means of investigation. 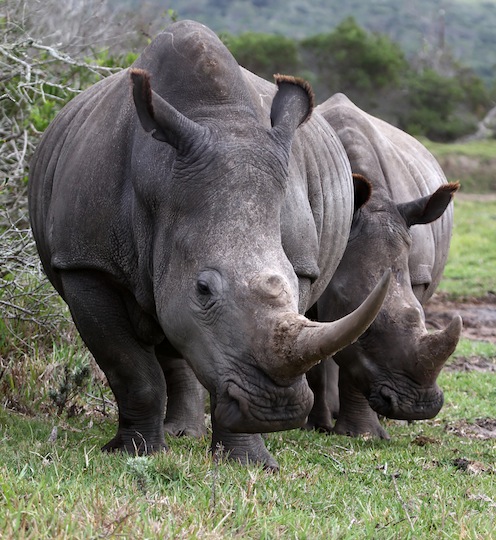 The javan rhinoceros is also known by the name, lesser one-horned rhinoceros. Their horn is the smallest of any species of rhino, which they use to widen wallows. Unlike other rhino species, the javan does not dig its own. Their skin is similar to the Indian rhino, and is usually gray or dark brown. Javan rhinos do not scrape in their territory, and are much less vocal than other species of rhinoceros. They do not respond well to humans, and may attack is alarmed of provoked.

The smallest of the rhinos, the Sumatran rhino has two horns. The Sumatran has no fat beneath its immense body to insulate it, so it is an active wallower. They, unlike other species of rhino, are hairy and are said to be closely related to the wooly rhino and because they wallow so frequently, they are more likely to be brown than gray. There is no evidence that the Sumatran rhino engages in territorial combat. They are critically endangered, and two subspecies have been listed as regionally extinct.

All of these rhinos have suffered the effects of human influence. Poaching and deforestation have reduced these wonderful creatures’ populations to mere fragments, spaced only under the protection of other humans. Hopefully, by expanding awareness of all of these unique subspecies of rhino, we can do our part in rescuing them from extinction. These creatures have been hunted for their horns, and their hides, a true testament to human selfish. Many poachers cut the horns from rhinoceros and set them back off into the wild, until they eventually die. We can do our part to help this species.