Birth and Care of Young

Rhinos, like most large land mammals, give birth to only one calf at a time. Rhinoceros deserve close inspection, and recorded instances of their mating habits and reproductive cycles. The rhinos’ mating rituals are an interesting example of territorial herbivores and how they deal with their environment. Here are some particulars of the rhinos’ reproductive anatomy, mating habits, and how they raise their calves.

Rhinoceros females can attain sexual maturity as early as three years of age, but usually closer to six years. Males usually mature more slowly, and can take as long as ten or twelve years before reproducing. Most male rhinos however, reach sexual maturity in eight years. Females will mate as soon as they become sexually viable, to maximize the number of calves she can birth in her lifetime.

Not much is known about certain rhinos ovulation cycles, but it has been confirmed that some do not have set mating seasons. This means that they may become sexually active two times per year. However, most seem to mate most often in the summer and fall seasons, likely do to the availability of food. 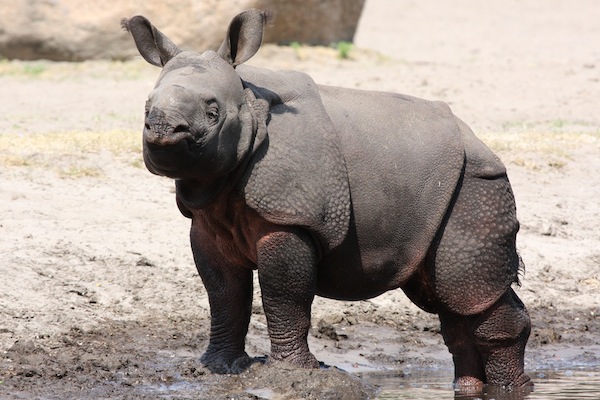 Bull male rhinos hold territories as large as eight-ten square miles wide, and when it smells a female in heat, will keep that female within the bounds of its territory. The male will do this by gently nudging, or even tackling the female, but should the female escape the bounds of the male’s territory, she is generally left to her own devices. The male will do this for up to three days, or until the female becomes acclimated to the male’s scent. Males can become violent within their territories if a lesser male infringes on a female in heat.

This is usually dealt with by clashing horns and fighting with sharp incisor teeth. After the female has become acclimated to the male rhino, the two will copulate. The two rhinos will stay together for up to a month, depending on the species, and the availability of food. Females will then leave the males’ territory to find a solitary location to give birth.

The calf can take up to 18 months to be born, but smaller species of rhino can develop in as few as 12 months. The mother gives birth to a single calf, which will stay attached to the mother for up to three years. Weaning generally occurs after a year, when the calf begins grazing or browsing for itself. After the weaning year, the calf travels with its mother for protection purposes, as while the rhino has no natural predators because of its immense size, many creatures will attack young unprotected rhinos. The mother drives off its calf after about three years, or when the female can find another mate. Most females can mate once every three or four years. 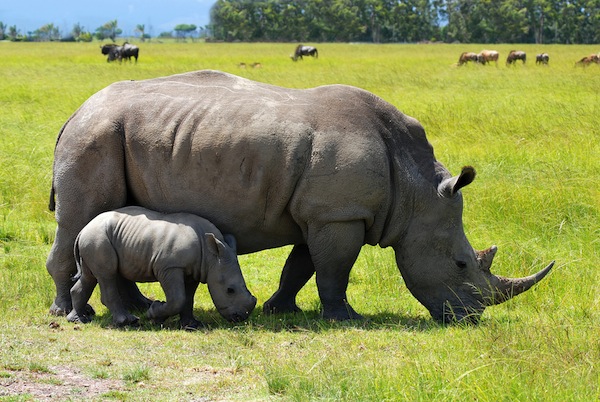 Some rhinos may even travel in groups as large as fifteen members. These “families” are usually groups of females, lesser males, and calves. It is speculated that these groups form in areas with rich food supplies, and large predators, and are used for safety purposes. Bull males are never seen in these large herds, or “crashes”, and prefer a solitary and stationary existence.

In captivity, the young calf will be removed from its mother after weaning, to stimulate the need to mate in the female. Because of this process, it is speculated that the “travel” period for the mother and her young, is a social response rather than a biological one, as females who have been removed from their young will often mate directly after the calf is gone.