Rhinoceroses are diverse in their eating habits and what they can ingest. Most rhinos are browse eaters, but a few are grazing eaters. They also have wonderful digestive abilities, and diverse tools to eat their food. Because of deforestation and poaching, the rhino is a rare sight in its natural habitat, so not everything is known about all of the rhinos eating and elimination habits, but here are a few interesting techniques and effective methods various subspecies of rhino use to obtain sustenance.

Every species of rhino has prehensile lips that allow them to reach and eat their primary diets. Most species of rhino have a rounded lip, the white rhinoceros has it in square, which enables them to cut and grab branches, saplings, and other foliage. The black rhino is unlike its cousins, as it has a pointed lip, to grab morsels higher up and snip them evenly. Rhinos use their lips and cheeks to help chew their food.

The larger horned rhinoceros are generally equipped with two rows of large molars for breaking down harder foliage. The smaller horned species have sharp incisor teeth used to shred food, as well as during combat. In the larger species, molars will sometimes break down, making it impossible to properly digest its food, causing them to starve.

The stomach of the rhino is a complex and interesting machine. After the foliage has been chewed, it moves through the digestive tract, to a hindquarter chamber. In this chamber, microorganisms break down the remaining plant life, and move it along the rhinos’ massive colon. All of the rhinos’ intestinal organs are extremely large when compared to other land mammals. This may be to increase survival chances during drought and when food has become scarce. 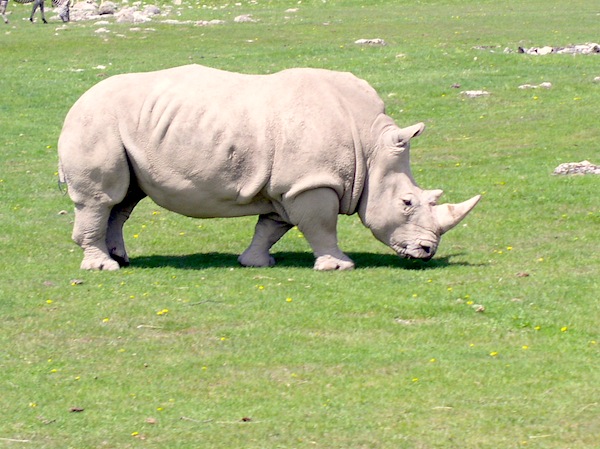 Most rhinos are browsers, meaning they spend most of their time looking for the tastiest morsels. They use their prehensile lips to pull saplings, and branches down. Sumatran rhinos will often browse through the remains of landslides for fruit and bark. Indian rhinos are actually grazers, preferring grass and shrub to other foliage. This breed of rhino consumes immense amounts of grass by swinging its head back and forth, while reaching its long head and bending its knees close to the ground. Large rhinos may knock trees down in order to eat the young shoots, and all rhinos are known to pull down saplings to eat the leaves and twigs.

As browsers, most rhinos eat a hugely diverse diet. They are fond of fruit when it is available, but survive largely on saplings, twigs, bark, and other rougher greens. All rhinos must occasionally lick salt and mineral deposits, to revitalize certain parts of their digestive system. Some rhinos have even been observed drinking salt water. Most rhinos will drink water two to three times a day, but the desert species can survive as long as five days without any. Rhinos are very social around these salt licks, and may communicate here.

Most rhinos use communal “latrines” as a method of communication, and occasional meeting. Rhino dung is very similar to elephant dung. Some species of rhinos scrape their feet in piles of this dung, to spread their scent around the boundaries of a male’s territory. Other species of rhino do not scrape, but still contribute to these latrines.

Like most other mammals, the child is fed milk from its mother for its formative years. After about a year, the child is weaned, and begins searching for its own food. As soon as the mother can breed again, the child is sent off to fend for itself.