The various subspecies of rhino communicate and coexist in amazing ways, displaying rudimentary vocalizations, and complex territorial rituals. Rhinos have been evolving and developing for several years, so it is no small wonder that they have such involved behavior. Here is a closer look into the rhino’s behavior patterns.

Rhinos are known to communicate with grunts, snorts, snuffs and occasionally whistles. They seem to only use this method of communication when in a group, various individual vocalizations have been recorded. It is not presently known what these sounds mean or why they are used.

The rhino’s primary method of marking its territory are scraping its large feet across the ground, breaking large or small foliage over, and by the long trails the creature leaves. It also uses pungent urine to mark the outside edges of a bull’s home turf. Rhinos are also known to eliminate feces in a communal area, scraping dung on their feet and tracking it around the bounds of their territory.

Rhinos have complex mating rituals, and must become acclimated with their partner before copulation. Mating begins when the female enters its ovulation cycle. The male will bar the female from leaving his territory, but will let her go free if she escapes. After as many as three days, the female will allow the male to copulate with her, and the pair will stay together some days. The female will then find a solitary place to give birth. When the calf reaches three to four years of age, the mother will drive it off, and attempt to mate again as soon as it is possible. 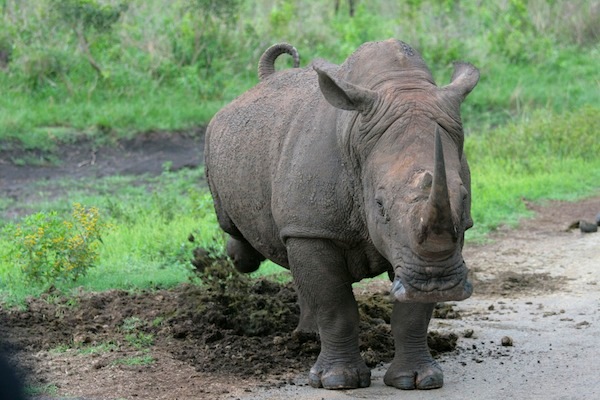 The rhino has very limited visual range. The rhinoceros’ face is long, with its eyes situated on either side its horn. It must turn its head in the direction it wishes to look, and its vision is relatively poor anyway. Never the less, the rhino is generally a curious creature, and tends to investigate alarming or dangerous situations by charging into things. Otherwise, it is a fairly docile creature, browsing or grazing happily. Rhinos may let a human upwind of it very close, making them an easy target for poachers. They have very acute hearing and smell however, and what seems like charging for no reason to humans, can be a response to either of those two stimuli.

Rhinos tend to be docile around other non-predatory animals. They share a symbiotic relationship with the tick birds, which cleans the rhinos’ hide of parasitic organisms. This bird also pecks at open sores on the rhinos hide, slowing the healing rate for such wounds considerably.

Rhinos also interact with elephants and other large mammals regularly at watering holes, and occasionally salt licks. When observed, they rhinos only reaction was to snort and walk away. Elephants and rhinos also leave long trails along commonly traveled routes, and use them as marking points for territories and quick ways to wallows, salt licks, or food sources.

Different rhino breeds have display varying degrees of these behaviors, and some show only the oddest of these. It has been speculated that prehistoric rhinoceros may has displayed more territorial instincts, or may have been more combative due to more powerful predators. The rhinos’ gregarious nature has been severely diminished by threat of extinction, making it very hard for these creatures to be observed in their natural habitat. Some rhino behavior may never be seen due to this irresponsible overhunting.