Many aspects of the rhino have been the target of scientific and destructive observation since the early eighteen hundreds and beyond. The most primary among these features, are the horns, skins, and muscles of the creatures. These have been the most commonly studied pieces of the rhinoceros’ anatomy, but have also caused the animal to become a primary hunting target for poachers, and irresponsible huntsman. The Greek root of rhinoceros can be broken into two distinct phrases, “rhino” meaning nose, “keras” meaning horns or tusks. Here are some interesting facts about the rhinos’ anatomy, and defense mechanisms.

The rhino horn is the most highly prized piece of this animal. It has been the subject of thousands of poaching enterprises, dating back as early as the fourteenth century in some Asian countries. Unlike dear or bovine horns which have a dense bone core and are attached to the animal’s skeleton, the rhinoceros’ horn is made up of corded keratin, the same material that human hair and nails are composed of. This horn is not attached to the rhino’s skeleton; instead it is rooted in the skin of the nose. Like a true horn, the rhinos’ horn grows throughout the animal’s lifetime, and can even repair itself if broken or damaged. 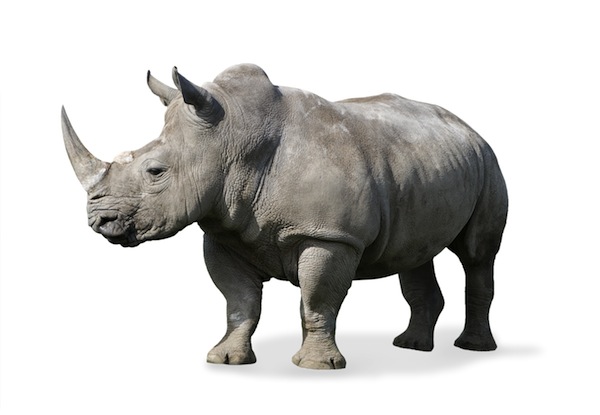 Some rhinos’ horns are little more than small bump like keratin deposits, while others can reach several centimeters in length. Rhinos use these horns for defensive, offensive, and utilitarian purposes. Most male bull rhinos engage in territorial defense, and use their horns to defeat lesser males in contests of raw strength, or to scare off predatory advances. Others use their sharp incisor teeth for combat, and save their horns for foraging and digging wallows in the mud. The rhino’s horn has been the target of poachers for centuries, and has been used in traditional Asian cultures.

Most rhinos’ skin is layered with subcutaneous fat used as insulation from both extreme heat in the day, to warmth during cold nights. The Indian rhino’s skin particularly is used to insulate the animal from hot days, and hangs around the creature in large folds. All rhino skin is very thick, to protect it from damage caused by rough foliage and the occasional predator attack. All but one species of rhinos are hairless, with the exception of the Sumatran rhino, which can grow hair on most parts of its body. This hair is used to replace other rhinos cooling mechanisms, and keeps dried mud close to the body. 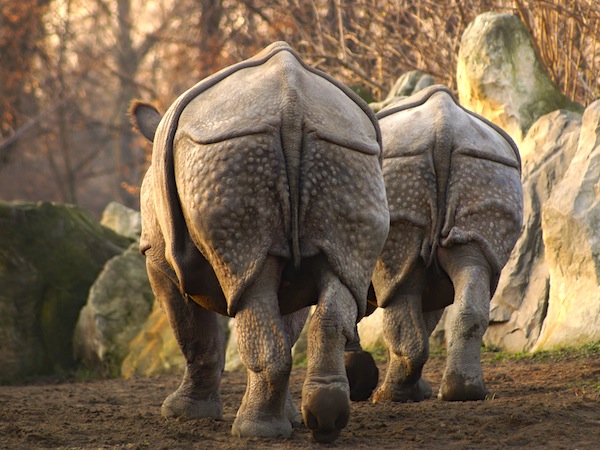 Rhinoceros’ heads are very long, with eyes on either side of their heads. Like birds, they must turn their heads in the direction they wish to look. Most rhinos have very poor sight, and rely more on sound and smells to navigate. The rhinos’ sense of smell is very acute, they can sense a human standing upwind from as far as a mile away. However, a motionless creature is nearly invisible to the rhino if they cannot smell or hear it.

Most rhinos are only equipped with two rows of deep molars. These teeth are particularly suited to grinding up plant matter. Some rhinos, however, have a sharp row of lower incisors which is used to break off stiffer plant matter.

Rhinos have two distinct lip structures, the pointed lips for high foliage grasping, flat square lips which are used for easy grazing. Black rhinos has a pointed lip structure and is the main feature that makes it different.