The Rhesus Macaque is an Old World monkey.  This species is a very popular one found and it’s also known as the Rhesus monkey.  It has fast become one of the world’s best known monkey species.  These monkeys can be either grey or brown and they will usually have a pink face.  The monkey’s tails are quite long, they are around 8 inches though can stretch to 9 inches; and the males can weigh almost 17 pounds. Females however, are smaller and will only weigh 12 pounds.

The males can measure out to around 21 inches where female measure out to 19 inches.  Their rib cage is wider than average and have a dorsal scapulae also; though, they have thirty two teeth and molars in their mouths.  The Rhesus Macaque monkeys do have some expressional faces and have quite a busy lifestyle also.

The monkeys are charismatic and do have fun with each other; they can be very cheeky!  Their coats are brown – pale shades of brown with some faded undertones to their underside of their bodies.  Their faces have no fur and are bright red – though this is only in adults in which their faces and indeed their rumps are bright red in colour.

They do also have larger cheek pouches which they use in order to store up food when they are out foraging.  The Rhesus Macaques monkeys are not the largest species of monkey so they are fairly small but they can weigh a tremendous amount of weight as they can reach up to 17 pounds.

The Rhesus Macaque’s are mostly found in the continents of Asia.  Countries such as; 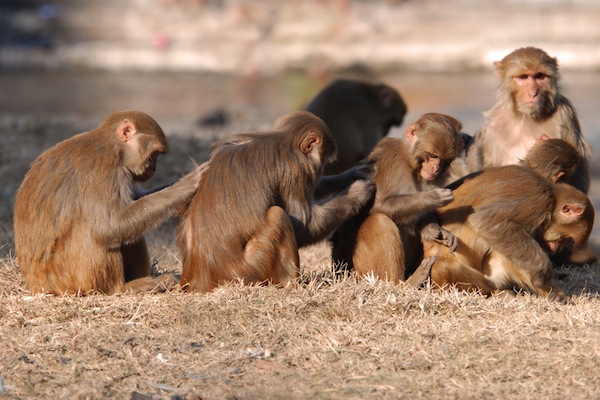 These monkeys can live in a variety of areas throughout Asia; and are more comfortable in woodlands, mountainous regions and grasslands. The Rhesus Macaque monkey’s regular swimmers and do often have a dip in the rivers. They can swim and are quite good and even younger monkeys that are days old, they can swim. Adult monkeys are able to swim half a mile without any trouble whatsoever which is very impressive.  However, some smaller babies often drown in drinking waters when they are a part of smaller groups.

However, some of these Rhesus Macaque monkeys live very close to human communities and are comfortable in doing so also.  Some groups often live by some handouts from the humans when it comes to food sources being scarce.  They can also adapt to most habitats so they can freely move from one location to another without trouble.

Mostly, the Rhesus Macaque monkeys are comfortable and found in forests and rainforests also.  Occasionally, they will be seen around human habitations such as roads, temples and housing areas but in many parts of the world, these are very much loved. Most humans try to be respectful of their animals and do not harm them should they come in to contact with.

These are herbivore animals because they will consume things such as seeds, roots, bark, cereals and fruits mainly, they do not eat meats.  Though, when there are monsoons approaching, the animals can survive through fruits which are ripe which gives the animals a much needed source of water.  However, it is not uncommon for some Rhesus Macaques monkeys to be homed further from a water source but when this does happen, they can live from getting water via dewdrops.  These come from the leaves on the trees.

On occasion, they have been known to eat beetles, ants, terminate and even grasshoppers but this is when the food sources have dried up completely.  Usually, a water source will be found close by to the Rhesus Macaques monkeys and shouldn’t have too many problems in getting water though this is not always the case. 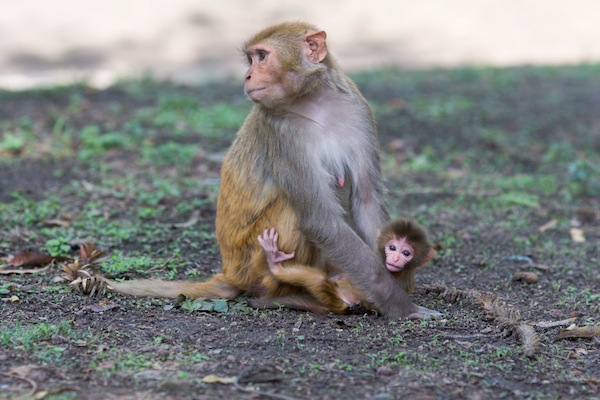 How Do Rhesus Monkeys Reproduce?

Male Rhesus Monkeys will try to maximise their success in reproducing. They’ll mate with females during the breeding period and outside the breeding period also this way it offers the males a higher chance of having a successful heritage.  Females generally try to mate with males who are higher up the chain with rankings because it offers them a better chance of survival.