The largest of all rays in the world is the Reef Manta Ray. They range in size from about 10 feet to about 11 ½ feet disc width. They are very graceful in the water, and they can swim quickly if they need to. Most of the time though they are moving at a slow pace. The females are considerably larger than the males.

Like all manta rays, they are very flat looking and they have pectoral wings featuring paddle like lobes that extend forward. The mouth is in the front of the body and it is very wide. These extensions are called cephalic lobs and they help with feeding. They do have a slim tail but they don’t feature a spine. The body is made up of cartilage rather than from bone. They have peg like teeth found on the lower part of the jaws. They also feature large eyes that are on the side of the head. Under the body there are gills.

They coloration of the Reef Manta Ray can be blue, black, brown, or gray. They also feature individualized blotches and spots that can be used to identify them from each other. The females have lots of scarring that allows the coloring to be more apparent as they get older. Such scarring is often from the biting of the males during mating.

There are plenty of locations around the world where the Reef Manta Ray is found. They tend to live in the sub-tropical and tropical waters. They live in the Indian, Pacific, and Atlantic oceans. They are found living in the Red Sea, the waters around Africa, around the Western part of Australia, and around Thailand. They have been found in new regions regularly due to the changes in water temperature.

With such a spread of locations though it does make it very hard to get a grasp on their overall population. They do migrate, but not to the same extent at the Giant Manta Ray species. The fact that the water temperatures where they live and the food supplies are usually consistent means that they don’t have to travel as far to make sure their basic needs are met. However, they don’t have a home habitat either. 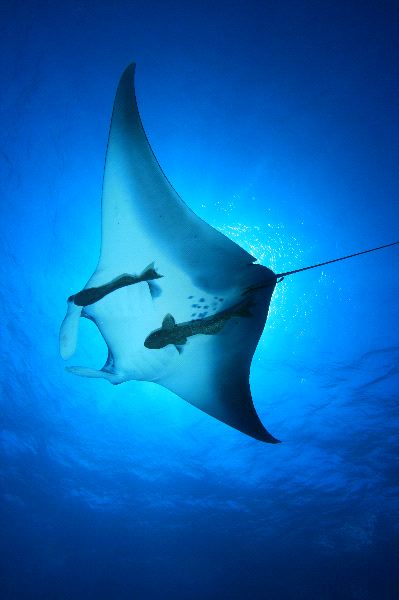 The Reef Manta Ray is a very good swimmer, and they have to move their body all the time. When they are moving at fast speeds, they seem to be flapping their pectoral fins. They have been seen leaping out of the water as well as rolling around at the bottom of the water where the sediment is. The jumps they do out of the water get them lots of attention. This process helps them to remove parasites and plays a role in mating. It is also believed to be a type of playing that they engage in.

They aren’t aggressive with each other due to not fighting over territory. There can be many males in pursuit of a female, but she will pick who she mates with so there isn’t any fighting among them for that opportunity. They are very timid and not a threat to humans in the water at all.

Cleaning stations are a mandatory part of life for all manta rays. This process involves small fish removing dead skin and parasites from their bodies. There can be many of them waiting around for their turn to have this done. This process is one that contributes to the survival of many species of fish in their habitat.

They are both filter feeders and bottom feeders. They take in large amounts of water and food in their mouth and then the gills rake through it. What is too large to pass through goes back into the environment. What does pass will go to the stomach for processing.

Their main food source is plankton, and it is mainly available at night when they rise to the top of the water. The Reef Manta Ray can feed any time of the day or night though. They will also consume various types of small fish and small shrimp.

When they move along the bottom of the water, they are often seen doing somersaults. This allows them to scoop up the food with ease. However, it may appear to a person watching that they are just messing around. They may end up in large groups when it comes to feeding sources, but they live alone and they hunt for food on their own. Their dark coloring makes it easy for them to blend into their surroundings so the element of surprise is on their side. 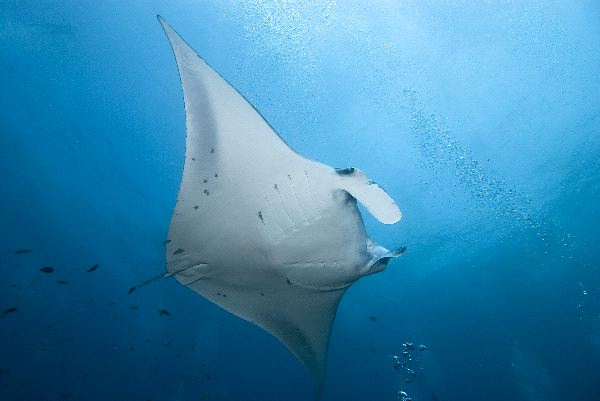 Mating for the manta rays can occur any time of the year. If they experience high levels of stress though they won’t engage in it. When they have enough food and the water isn’t too cold though they will do so. Many studies suggest that a full moon plays a huge role in the mating process. The males will pursue females for at least 30 minutes and she will decide if she is going to mate with a male or not by mimicking his movements if she is interested.

After mating, the pair will go their own directions and the female will give birth to a pup about a year later. She will move very close to the shore for the pup to be born, which will weigh about 20 pounds at birth. She will leave it there and the young will have to instinctively be able to survive on their own from the very beginning. They will feed on the plankton there for about the first year of life. Since they are so close to the shore, the mortality rate is very high due to various predators.

The females only mate every other year. It is believed this allows their body time to build up nutrients and to be healthy enough for the pup to grow successfully. Since they don’t do well in captivity, breeding programs to help increase population isn’t an option.