The Red Tailed Hawk is a bird of prey. It is often referred to as the Chicken Hawk. They range in size from 1.5 to 3 ½ pounds. They range in length from 18 to 26 inches. They feature a wingspan that ranges from 43 to 57 inches. The females are usually about 25% bigger and heavier than the males.

They are considered to be sacred in the Native American cultures. They frequently use the feathers of this particular bird for various ceremonies and rituals. They believe this bird is connected to the spirit world that they honor.

The body of this bird is very round and it offers various shades of brown. The front and underneath are white with patches of brown on them. They have lighter brown around the head and front of the body. Under the dark brown wings are white feathers that can be seen when this bird is in flight. As you guessed, the tail of this bird is red in color.

The Red Tailed Hawk is one of 3 species that is found in the USA. They live in many regions of North and Central America. They range from Alaska to Canada. They can survive in many different altitudes and climates. They are found in deserts, forests, and around grasslands. Those living in colder climates will take part in migration into other areas of the USA and Mexico.

They are very intelligent birds and they learn quickly. They are the falcon of choice in the USA that are trained for various tasks including those taken on by various forms of the USA armed forces.

To conserve energy the Red Tailed Hawk rarely flaps the wings while in flight. Instead, it allows currents from the wind to help them gracefully float around. They typically move about 20 to 40 miles per hour. However, they have been known to travel up to 120 miles per hour at times.

They have various forms of vocalizations that sounds like screams. Other sounds that they offer are similar to a steam whistle. They tend to make sounds as they soar and while they are hunting. They use sounds to be able to offer warnings, to show anger, and to protect their territory. 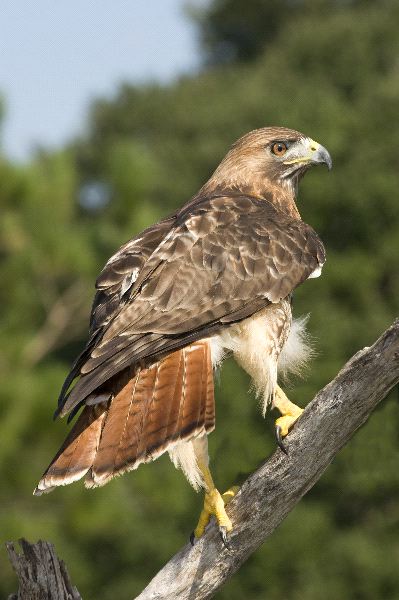 They are carnivores and they take every opportunity they can find to eat. They consume other birds, reptiles, and small mammals. About 85% of their diet comes from rodent populations. They will also consume fish, bats, squirrels, insects, and crustaceans. What they will have access to depends on location and the time of the year.

They will sit patiently at a perched location and wait for prey. They will swoop down on it and use their powerful talons to grab it. They use their beak to pull of pieces while the talons hold the prey in place.

This bird can take part in mating when they are about 2 years old. The females select their mate and that is the one she will mate with until she dies or that mate is no longer available. They will use the same nesting locations year after year as long as it remains available.

The female will offer from 1 to 3 eggs for the nest in either March or April. The female will incubate them but when she needs to go get food the male will fill in for her. About 28 to 35 days, the chicks will emerge. The male will bring food back and the female will give it to the young. They will stay with their parents for about 10 weeks.

The Red Tailed Hawk is protected under the Migratory Treaty Bird Act. This covers their residence in the USA, Canada, and Mexico. They don’t have low numbers at this point in time but many believe without such production they would. 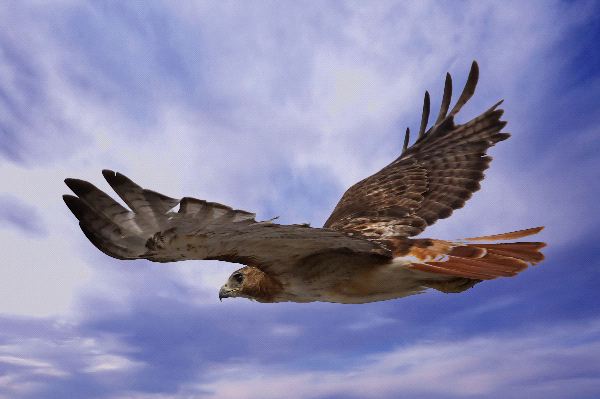