The Pygmy Marmoset can also be known as the dwarf monkey.  This is a new world monkey and they are a very small animal. They are probably one of the smallest primates – probably the smallest, in the world today and can be almost 6 inches in size. Their tail can be around 8 inches but the pygmy’s can weigh between around 3 and 5 ounces.

The body is very small and it is grey with a mix or black combined within its fur.  Though, the pygmy has a brown and gold shade of the fur to the back of the monkey. The pygmy has a fur tail like squirrel; and they do have an orange/yellow feet and has sharp nails which resemble claws. These claws help to hang and cling on to tress.

The pygmy has a tail with darker rings against a light shade of tail; though the mane surrounding the face is long and will cover the ears of the pygmy also. There are white flecks near the mouths with some markings of a white stripe on the nose. The monkeys love to communicate via their facial expressions; but the male pygmy’s are lighter than the females strangely.

The monkeys are quite quiet but they are able to be vocal when they need to be. They have a sharp and high whistle which is used as a warning sound; and they can create a clicking sound which offers a threat indication.

The Habitat of the Smallest Primate in the World

The pygmy usually lives within the Amazon basin; and there are two different sub-species.

The first can be found throughout the Amazon such as Peru, Brazil and Bolivia. The second can be found in most Amazon states including Colombia, Ecuador and Peru. The pygmy’s usually are found in lowlands, usually the tropical forests and evergreen forests. They do like the areas which are prone to flooding at times; they do not mind these areas and rather like them. Being near the rivers offer the pygmy’s some protection, though they still have to be very careful. The pygmy’s love areas which are dense with trees and rain. 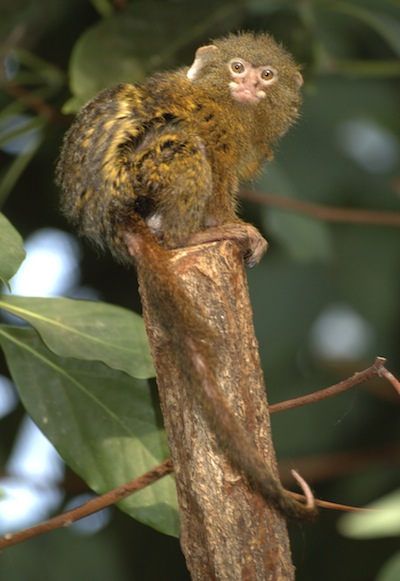 Usually the pygmy’s live in smaller groups. There are usually groups made up of 1-2 adults; but the females will breed a few times a year and will have off springs twice a year. Most of the group will help to carry the infants around and will share in raising the young also; though for the infants growing up, they will not mate with any of the off spring. The relationship between the younger and mature adults is none existent.

What Do the Pygmy’s Eat?

The pygmy’s do have a special type of diet. They usually eat tree gum; they gnaw through the holes of a bark; though with a rapid decline of resources for tree gum, the pygmy’s tend to move to another tree. They do like to eat insects and find food resources wherever they can and eat whatever they can ingest. Their claws are able to find little insects deep within the group and on the surface to consume when the food sources are low.

How the Reproductive System Works

The gestation period if going to be around 4 and half months; and the pygmy’s usually give birth between 5 and 7 months. Most of the times, only 2 babies are born, however, in captivity such as zoos, the female pygmy will give birth to 3 or 4 babies at one time. The infants are so small however; they are only the size of a human’s thumb – that is super small.

It can take almost 2 years before the pygmy reaches adulthood. However, some pygmy’s can leave the group in order to start a family.

The size of the pygmy groups can vary; some, if not most, have around 5 monkeys.  Usually, this consists of a male and female; a dominate male and female and their groups consists of their young. Pygmy monkeys are very protective of their females and can become quite aggressive during the mating season. 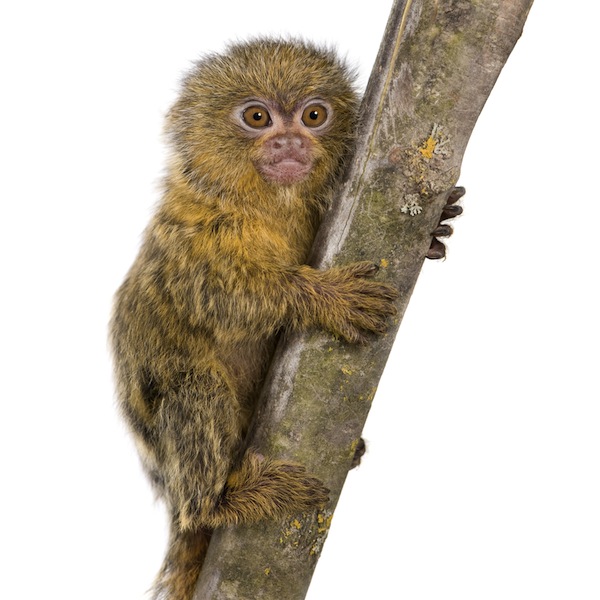 However, the entire group will be protective of the infants and the new born usually weigh a good 16-25 grams. The infants mature after about two years; but the juveniles will stay with the group.

The pygmy’s love to share the responsibilities of parental duties. Members of the group interact with the infants and carry them. They often groom them and help to provide food also; the caregivers of the group tend to become responsible for the pygmy infants.

This helps to take the stress away from the mothers of the group and help to become closer.  Of course, the males cannot nurse the infants but they can be very protective when a situation becomes threatening. The males help to ensure the infants are cared for within the group.

When it comes to knowing how long a pygmy marmoset lives, not a lot is known. There are many people believe the pygmy monkeys don’t live for a long time. Many think there are different elements out there that could cut short a pygmy’s lifespan.

There are a lot of small fields with pray lurking around every bend; and with a lot of different birds of prey, it is simple to understand why the pygmy’s lifespan would be short.  There are also snakes, which climbs can pose a threat even if they’re in the trees.