This is a very powerful bear with sharp claws that they use for hunting. While they do spend most of their time in the water, they also spend time on land. They are able to move easier in water though as they are very good swimmers. They can wait patiently for hours to wait for seals to come to the surface for air. That is when they will attack and get their food. Yet many of their attempts are unsuccessful. It can prove to be very hard for a Polar Bear to get enough food. 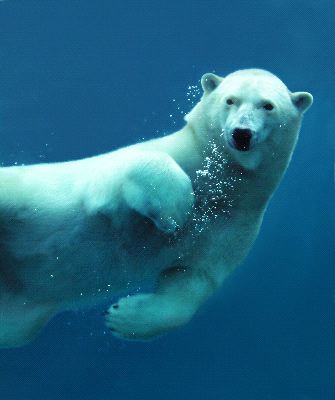 The home range for a Polar Bear can be very large, but it depends on the location. Some of them have about 19,000 square miles and others have about 135,000 square miles. Migration can be a huge part of survival for them. In some areas, they will move with the ice pack in order to have the best hunting conditions. It is known though that in some areas they don’t migrate as the conditions in that area are good for them all year long.

The Polar Bear needs to consume large amounts of food when possible. This allows them to store up fat reserves for when there isn’t enough food for them. They don’t hibernate, but females that are pregnant may spend several months in a den. By slowing down their metabolism they can live on that fat for several months. This helps too when the ice has melted in the late summer and early spring which makes it more difficult to reach the seals.

The young cubs will consume the red meat and the adults will consume the skin and blubber from the seals. Adults may also consume birds, eggs, walrus, and even rodents in order to survive. For the Polar Bear, being an effective hunter is key to survival. They may wait patiently by seal breathing holes and attack once they get the smell of a seal. They can also creep up on seals on land but that takes patience and a great deal of quiet mobility to be successful.

Mating takes place for the Polar Bears when the females are from 4 to 6 years old and the males are about 6 years of age. However, females will only mate about every 3rd year so there is an abundance of males looking for a male. The largest and strongest get to mate and that is why most of the males are between 8 and 10 years of age when mating occurs. A pair will spend a week or so with each other, mating often during that period of time. 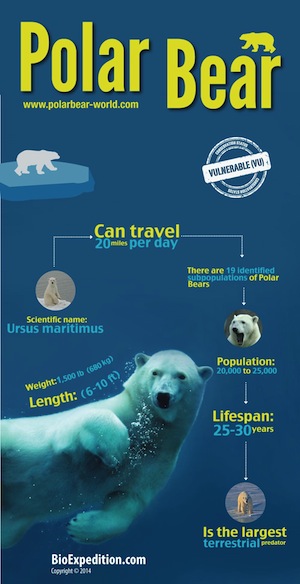 The male will venture off to look for more females that he can mate with. The female has a delayed system for the egg to grow and mature so that conditions are more timely for them. They will consume all the food they can as the female needs to at least double in body weight before she goes to make her den in a couple of months. While in the den, her body will slow down but she won’t be hibernating. She will live off fat reserves for many months including up to two months after her young are born.

The offspring are very small at birth, about 2 pounds, and they are blind. They drink milk from the mother and grow rapidly. They will be from 22 to 33 pounds when they first come out of the den. The mother will have to find food quickly when she comes out and often consumes various forms of vegetation. Once she has enough strength, she will go to the ice with the young where she will introduce them to seal hunting and to eating read meat from the seals she is able to kill.

Currently, there are believed to be from 20,000 to 25,000 of them in the wild. The future for the Polar Bear though is one with plenty of uncertainty. Changes in their natural environment, hunting, and even a lack of food tend to cause problems for them. Due to the low numbers there is also concern about the quality of the genetic pool for mating.

There are some conservation efforts in place to help them get their numbers to increase as well as to improve genetics of the offspring. Part of this conservation involves making sure that the bears can’t get into human items such as garbage, motor oil, chemicals, and plastics that could harm them or kill them.