Even though Polar Bears live both on land and in the water, they are classified as marine animals due to the amount of time they spend in the water. The cold location of the Arctic Ocean where there is plenty of ice and cold weather is the environment this species of bear is able to thrive in. They are able to use that environment to their advantage for hunting.

The body of the Polar Bear is designed so that not all of their weight is on one part of it. This helps prevent them from falling into the ice. They also have pads on the bottom of their paws that allow them to have additional traction on the slippery ice. They are able to live in very cold temperatures, but few of them are found along the ice of the Continental Shelf in the North Arctic Ocean area. This area is called Arctic ring of life.

Some of the common locations where Polar Bears do well include Norway, the South portion of Labrador, and Newfoundland. If there is heavy ice pack, they are also going to be found around the Bering Sea as well as the Gulf of St. Lawrence. Every few years it seems that the conditions are perfect for them to be in those two locations. To the far North there are some Polar Bears that live in a part of Canada known as James Bay. 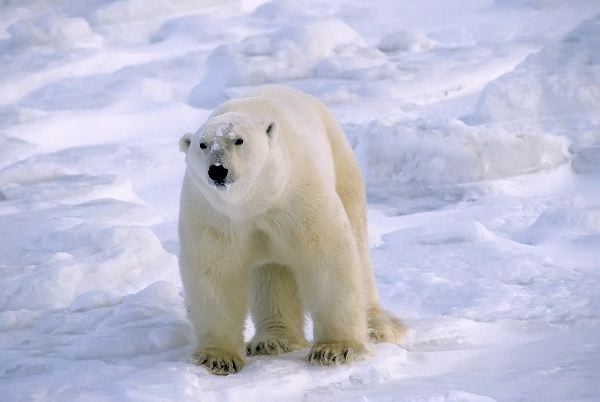 Even though Polar Bears tend to live an isolated lifestyle, experts believe that there are about 19 subpopulations out there. This means that they share a common home range but that there will be some parts of it that overlap with other populations. Scientists have been studying these subpopulations for some time.

It becomes harder to monitor them though due to the extensive migrations that they can take part in. Some Polar Bears live in the same area all year long. Others though are nomadic and they will stay with the ice pack all year long on the Southern edge of it. Their movement depends on the ice as it controls access to food. A home range can vary in size from 19,000 to 135,000 square miles for the Polar Bear! They don’t mark their territory as they move about like other bear species do.

Even though the majority of their time will be spent in the water, they do spend some time on land. In some locations, that seems to be more than others due to the lack of ice pieces that break off. They have to be careful not to get stranded on land as it could prove to be very difficult for them to get enough food. They are able to move about 20 miles per day which is very good for a creature of such size.

The Polar Bear has a very wide home range that it covers for food and for the right hunting environment. The ice pack will freeze, melt, and freeze again in different sections so they will travel in order to take advantage of the environment at a given point in time. In the summer months they are usually located on the coastline or on the small islands where there are large chunks of ice that they can float around on. The location of the ice will play a vital role in the movement of a Polar Bear.

With all the movement and the cold locations where they live, getting a good count of the number of them in the wild can be difficult. It is believed there are between 20,000 and 25,000 of them – with approximately the same number of males as females.