Polar Bears are considered to be carnivores as they eat mainly meat. In fact, they are known to consume more meat than any other species of bear. Their main source of food is seals with two species being what they rely on. They are the Bearded Seals and the Ringed Seals. In the Arctic where the Polar Bears live, there are millions of them that they can prey upon.

Hunting isn’t easy for them though as they have to wait for the seals to come to the surface for air. There are many small breathing holes on the ice where they come up for air or they may decide to come up to the surface of the ice to rest. For the Polar Bears, the best opportunity to dine is when the seals are surfacing for air.

This type of hunting is called still-hunting and it involves them using their keen sense of smell to find where seals will be coming up for air. The bear can smell them when they exhale and they can quickly reach out and grab the seal with their sharp claws and powerful paws. Then they use very sharp teeth to bite the head. They can wait patiently for a very long time to get seals this way. Often, the seals escape before the bear can get a meal so they have to spend lots of time hunting.

Another method of hunting for food that the Polar Bear executes is creeping. They will crouch down and slowly creep towards the seal. As they get very close, they will rush and attack suddenly with the element of surprise on their side. If they can find locations where females have placed their young they will attack them.

What is very interesting is what the Polar Bears are going to eat. When they are young cubs they will eat the red meat which contains high amounts of protein. The adults though will only eat the blubber and the skin of the seals which offers them plenty of calories. 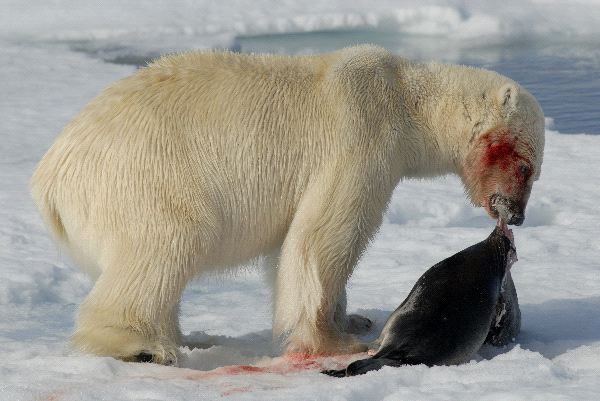 When seals aren’t plentiful, Polar Bears will do what they can to survive. They may consume adult birds, young chicks, and even eggs that they can find in nests. They often have to climb cliffs though to get to them which can be very dangerous for them to do so. They have also been noted to attempt to kill adult walrus but very rarely will they do so. The tusks of a walrus can cause great injury or death to the Polar Bear.

Still, if they are desperate for food they may take that chance. If they are going to take such a risk, they will often search for a weak older one, a walrus that is injured, or a young one that has moved too far from the protection of the adult females.

Polar Bears take the time to wash their face and paws after a meal. They do this with either snow on land or in the water. They don’t hibernate like other bears do but the females will spend several months in a den if they are pregnant. They do have the ability to slow their metabolism though to help them be able to go for several months without food in the latter part of summer and the early fall.

The rest of the year though they will consume as much as they get the opportunity to. This will allow them to live off of the fat reserves later on. They are curious creatures, and that can pose some threats for them when humans are around. They have been known to consume batteries, chemicals and fluids, plastic, Styrofoam, motor oil, and garbage. Such items can cause severe health problems and even death for the Polar Bear.