The Polar Bear is known as the largest terrestrial carnivore in the world! The body of a Polar Bear is designed for them to live in very difficult conditions. They are able to live in the very cold locations of the Arctic. Even though they have a body that is large and stocky, they are able to get around on the icy land and the water with ease.

They are excellent swimmers and spend more of their time in the water than they do on land. They have plenty of buoyance so they don’t use as much energy in the water as they do on land. While they tend to move slowly on land, they do have the ability to sprint when necessary. They don’t have a shoulder hump like the Brown Bear, but other than that and the coloring the two species are very similar in anatomy.

There are a few differences though to point out. Overall, the Polar Bear has a smaller head than other species. They also feature a neck that is longer. The males are larger than the females with a weight of anywhere from 770 pounds to 1,500 pounds. The females weigh from 330 pounds to 550 pounds. They will at least double their body weight during the feeding frenzy before they go to a den to have their cubs.  The height of a Polar Bear can range from 6 feet to 9 1/2 feet. Typically, adult males are a foot or two taller than female adults. 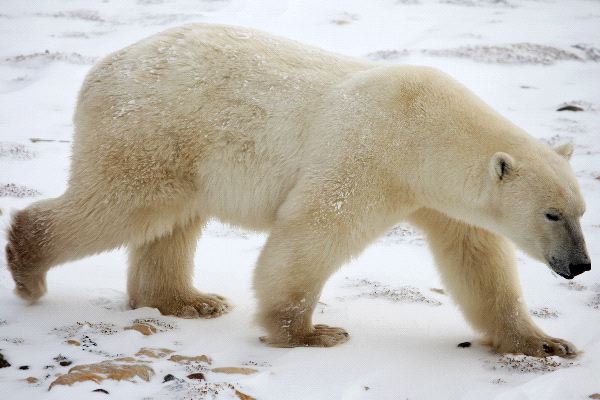 Young cubs are born with a light brown fur but within a few weeks the white color Polar Bears are well known for will emerge. In the summer they do have a yellowish color to them due to the lighting. Experts though believe the skin is black and the fur is clear because it doesn’t have any pigment in it. The white and yellow we see is the result of how light is reflected from those clear hairs. In captivity, the yellow is often more evident than the white if the environment is warm.

The fur of a Polar Bear offers it a layer that insulates them. They can have almost 4 inches of blubber that helps to keep them warm. This is how they are able to live in the harsh conditions and how they are able to swim in freezing water. They have enormous paws that they use like paddles when they swim. The bottoms of their feet have fur on them that provides them with both insulation and traction while on the ice. They have the ability to distribute their weight around the body so that there isn’t too much of an impact on the ice below them. 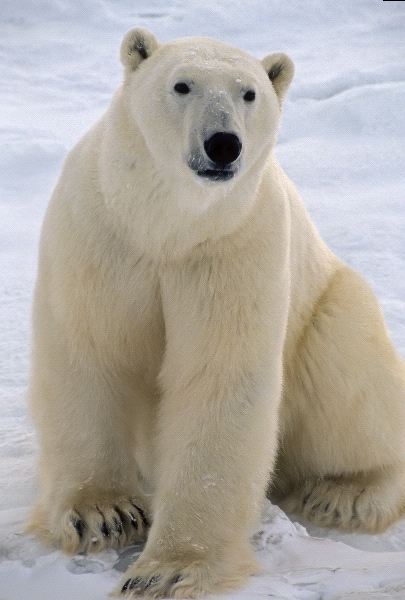 While the Polar Bear does have very sharp claws, they are shorter and stockier than those of other species of bears. It is believed this difference allows them to be able to grip their prey and even the ice. Females have to use their claws to be able to create a den either underground or in the snow pack.

There are 42 teeth in the mouth of a Polar Bear, and they are designed to help them live a life with meat mainly being consumed. They have very large and sharp canines and then smaller jagged check teeth.

The sense of smell is very strong for the Polar Bear, and plays a key role in them being able to detect when seals are at the surface of air holes in the ice. They can detect them up to 1 mile away. They can also detect female seal dens that are up to 3 feet below the surface of the snow. They also have very good vision and hearing. Their senses allow them to thrive in their natural environment.