The Platypus is a very unique looking creature. It seems like it is a cross between a duck and a beaver. It is a huge symbol around Australia including on many of their coins. It is also a common mascot for various sports teams in that country. They weigh from 1.5 to 5 pounds and the males are larger than the females. The males are about 20 inches long with the females about 15 to 17 inches.

The most distinctive element of the Platypus is the fact that they have a duck like bill. Their entire bodies are brown and they have long hairs. The fur is able to trap in air below it and that helps to keep them cool or warm depending on the outside temperatures as well as the temperatures of the water.

They have a tail that looks like a beaver as does their roundish body. To finish it all off they have a tail that is very similar to that of the otter. The tail serves to help them with navigating in the water. It also allows them to store up fat for when it is hard for them to get enough food. They have webbed feet in the back so when they are on land they walk on their knuckles.

The Platypus is semi aquatic so it has to live close to areas of water. They also live on the land surrounding it. They are found around areas of Australia and in Tasmania.

Most people have a hard time believing that the Platypus is venomous but that is absolutely true! Only the male though is venomous and it is released from a spur around the front of the feet. They can cause a great deal of pain to both humans and other animals due to that venom.

The Platypus is very territorial. They will give off a variety of growls to warn others that they have already staked a claim to a given territory. 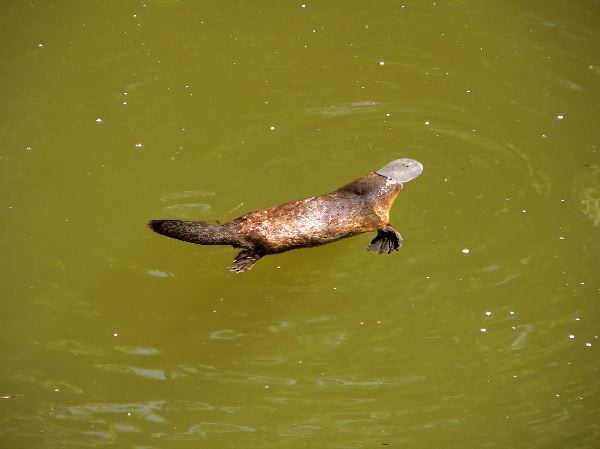 The process of finding food is really interesting to explore with the Platypus. They are able to tune into the electricity that living things give off. Those pulses offer a type of map in their brains that show them where to find their food. They close their eyes and their ears to dive into the water to get their prey. They don’t use sound or vision to help them locate it.

They are born with teeth but as they get older they are replaced with plates that they use for grinding up food in their mouth. Their food sources include larvae from insects, frogs, crustaceans and fish eggs.

Mating often occurs for those over 2 years of age. After the male and female mate the go their own ways. The female will create a place in her burrow for the young. The Platypus is the only animal in the world that is classified as a mammal but they lay eggs instead of offering live birth to their young.

When the young arrive they will be fed by the milk of the mother for several months. When they are about 4 months old they will emerge with her from the burrow and go into the water.

There were once concerns over the future of the Platypus due to it being heavily hunted for the fur. That is no longer a concern though as there is very little money to be made from them. The issue that does threaten them is loss of habitat as well as pollution in the waters where they live. However, they have high enough numbers that there is really no reason for concern at this point in time.