The Piranha has a terrible reputation but they aren’t people killers like legends and movies tell us. They do have very sharp teeth though. Some people have kept them as exotic fish for a unique pet but then later released them into bodies of water. Some of them have been able to thrive in those new environments which further shows their adaptability. They seem to be able to do well anywhere that offers them enough water and food.

The body of the Piranha is a gray color that can also be olive in some areas. They have tightly packed teeth that interlock to each other. They use them to sheer and to puncture their prey. They can be from 5 to 10 inches long. There are various piranha species so the size and coloration of them can vary significantly. They tend to blend in well to their surroundings.

They have scales and a head that is very large. They have a tail that is the length of the back of the body to help them successfully navigate through the waters. The tail is very thick and powerful. They feature a serrated area across the body that makes it easier for them to move with ease through the body. They are very fast swimmers and those movements don’t take very much energy either.

They are fresh water fish found in the rivers of South America. The Amazon Basin is the main location where you will find them residing. Some species are found in Bangladesh and China. They tend to prefer fast moving bodies of water versus those that are still or calm. They seem to be finding their way to more and more locations all the time. It could be do to people purposefully moving them or it could be due to them being caught in fishing nets, then found and released at a later point when those pods are emptied. 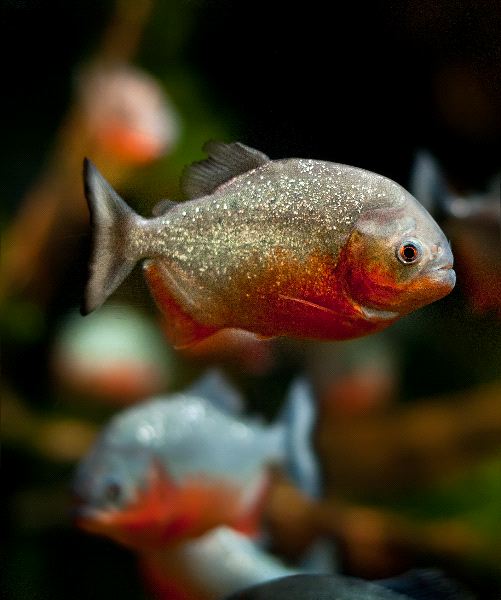 The Piranha isn’t lurking in the water, waiting for a person or animal such as a horse to come along that they can consume. They may be drawn to the smell of blood though because it means that there could be food close by. Most people won’t be terribly injured by one biting them. There are some species though that can kill a person but they are very rare.

They tend to stay in large schools but they can be very aggressive there. The hierarchy of it is hard to decipher due to the many changes and levels of it. The older fish that are strong and dominant are the ones on the outer edges with the young and females protected in the middle of the school.

They are aggressive eaters that often will be seen with feeding frenzies when there is an abundance of food offered. They will eat a variety of types of food including insects, invertebrates, and small animals. They will scavenge for carrion though of animal remains as well as human remains. They are going to take the opportunity to feed on birds that come into the water or plants that they find in their habitat as well. Anything that they possibly can consume, they will.

Mating occurs for the Piranha from May through June. They will move to slower moving water to be able to mate. The female deposit her eggs that the male will fertilize with sperm. The female will lay those eggs in a secluded location. Approximately 90% of the eggs will survive. They can live up to 12 years in the wild with the right conditions. They seem to do well even in bodies of water that are heavily polluted. 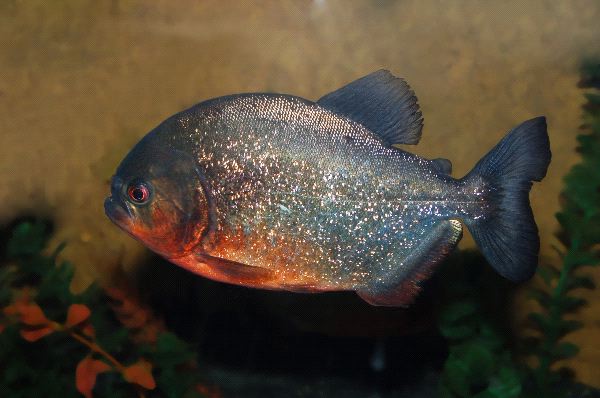