There are 17 known species of penguins, and some of them you may be very familiar with. All species are classified as birds, but none of them are able to fly. All of them live both on land and in the water. How much time they spend in each location, their size, and other factors though depend on the specific species.

It is easy to assume all types of penguins are just black and white. They all have those base coloring with the white on the belly region. Some have other colors such as red, yellow, and orange on the body. There are also a few species that have a crown of color on top of the head. Such unique factors can be telling signs about which species of penguin you are observing.

There are some unique elements to learn about various types of penguins though instead of lumping them all together. The largest species is the Emperor Penguin and the smallest is the Little Penguin.

The Erect-Crested Penguin is the species that the least information is known about. For example, where they spend their winter around the Antarctic. They have a yellow above the eyes that stands up which is where their name comes from.

The Fiordland Penguin is medium sized and also features a yellow crest. It also has yellow extending from the eyes to the neck. This is the least social species of all penguins. They spend 75% of their lives in the water. 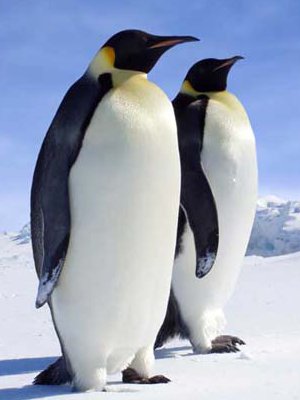 The Humboldt Penguin also is medium size and they spend most of their time in the water. During breeding season, they will create nests in the rocky regions. They are very good climbers. The Magellanic Penguin is named after Ferdinand Magellan who first saw them in 1519. They are the most vocal of all species.

Royal Penguins are medium sized, and often confused for other similar species. They are one of the most vulnerable of all species right now in terms of their overall survival. They mainly reside around Australia and the sub Antarctic Islands.

The Snares Penguin seems to have the largest range of vocalizations. There are still many of them that experts aren’t sure what they mean. The spots and stripe on the belly of the African Penguin makes it very unique. Each of them have different patterns that can be used for personalized identification.

The Chinstrap Penguin gets its name from a black band that runs over the head. This gives the impression that they have a helmet on. The Gentoo Penguin is easily identified by the longer tail that it displays than other species. The Galapagos Penguin is small and it is one of the banded species. It lives around Galapagos Islands where it is able to with stand temperatures on land and in the water that are colder than where most other penguins live.

The Macaroni Penguin is one that features the bright yellow crust on top. They are one of six species of penguins that feature it. There is no mistaking the Yellow-Eyed Penguin for any other species due to some characteristics that it displays. As the name indicates, they feature yellow eyes. They also have yellow feathers on the head.

Another species of penguin that is easy to identify if the Adelie Penguin. They feature white around their eyes. The King Penguin is one of the larger species and it is very often mistaken for the Emperor Penguins. While they are similar, there are enough differences for them to be in two species categories. As the name indicates, the Rockhopper Penguin lives in very rocky regions. They are able to both climb and hop with ease.