Penguins are fascinating and also very interesting. They are classified as birds, but none of the species are able to fly. They also have more feathers on their body than any other species of bird. There is much more to them though that most people think. There are plenty of species of penguins and they live in a variety of regions around the world. Some of them live in warm temperatures and others are able to live in the freezing cold where very few creatures could survive.

They also variety a great deal when it comes to their overall size and coloration. The largest is the Emperor Penguin which is about 3 feet, 7 inches tall and weighs anywhere from 60 to 90 pounds. The smallest is the Fairy Penguin and it is about 16 inches tall when fully grown. It is also going to weigh about 2-3 pounds.

The body of a penguin is designed to allow them to move with ease in the water. They also live on land and they are able to walk upright. They rely on their flippers and tail to help them stay balanced. The black and white coloration of penguins has a distinct purpose for protecting them in the water. The dark color makes it harder for them to be noticed by any predators that could be above them.

They also feature a white belly, and this helps them to blend in well from below. A predator looking up at them may believe they are just seeing a water reflection rather than a potential meal. Depending on the species of penguin, they could also feature red, yellow, and other colors on their bodies.

The larger species are known to dive very deep in the water to find food. Smaller species of penguins also dive, but not to the same depths. They consume krill, crustaceans, fish, and squid. The size and shape of the bill for any given species depends on what their main diet consists of. All species swallow their food whole. They have spiny rear directed elements that help them to easily swallow it.

Molting takes place at least once a year for the penguins. This involves them losing old feathers and new ones coming in. The new push out the old so they can look very different during that transition. As the molting process occurs, they will fast and remain on land. They don’t have enough insulation to go into the water for food until all of the new feathers have emerged. They have layers of fat that they survive on until they can return to the water for food. 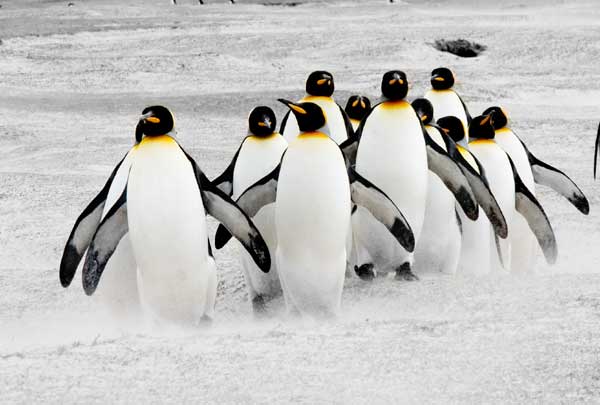 Communication is a big part of life for penguins, and they are the most social species of all birds. They use a variety of vocalizations to attract a mate, to identify their mate, to warn of dangers, and to communicate with mates and their young. Colonies can become very large and noisy. Since they look alike, they use these methods of communication to help them daily.

Penguins live in colonies and that helps them to be safe. They may spend time alone hunting or in a given area on land. However, they are collectively part of a very large colony. There is a hierarchy there that can be complex but it works very well for them.

At times, the penguins may look silly – twisting and turning their bodies. This is part of the preening process which involves them taking oil from the tail with their bill and spreading it on their features. This ensures that the features remain waterproof and provide them the level of insulation that they require.

There are quite a few variables in place for penguins when it comes to mating. The age of maturity can range from 3 to 8 depending on species and location. There also different types of courting and rituals among different species. It is common in many colonies for the same couple to mate each year.

The males help to take care of the eggs, to help with feeding and raising the young, and to protect them. They are very hands on but the majority of the caretaking is completed by the females of the colony. Most of the time there is only one egg that a female will lay after mating. The size of the egg depends on the species. When there are two eggs, the second chick will almost always die.

There are conservation efforts in place to help protect penguins from harm. This includes securing some of the beach locations where they gather and where they lay their eggs. Keeping the water free from pollution is also very important. Penguins seem to do very well in captivity as long as they aren’t isolated. They need the social interactions with others to be able to thrive.