Penguins depend a great deal on their vocalizations to help them locate each other. When a large colony is observed, it can be very noisy. From a human perspective, it can also seem very chaotic. However, for the penguins it works very well. They seem to thrive on such interactions and there is safety for them in large numbers. Male penguins help with keeping the eggs warm and safe until they hatch.

Mates can recognize the sides of each other and chicks can identify the sounds of parents from an early age. In some species, there are also differences in terms of the calls from males and females. They differences within a colony for communication though does make it harder for experts to pinpoint what all of it means. They have been able to make some positive identifications in this area though.

There are various types of calls that the experts have identified as taking place in any penguin colony. The display call is very complex and it is reserved for use between partners in a given colony. The call allows them to identify territory, to recognize the gender, and to be used for identity of the partner.

There is a threat call that is used to help warn about any possible dangers. This is a loud call so that members of the colony can quickly take action against the threat of predators. Parents may use this call to help direct their young too so that they avoid common dangers in their environment.

There is safety in numbers for penguins which is a big reason why they socialize on such a large scale. They may be isolated though when they dive for food. That is when they are the most vulnerable to various predators. However, when there is plenty of food in a given location they will feed in groups for that additional level of protection. 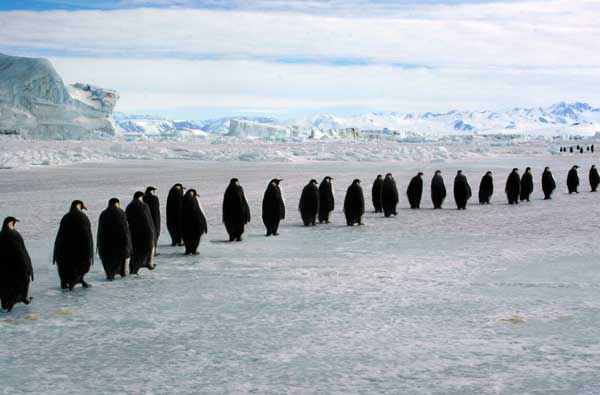 Penguins will spend a great deal of time engaging in preening their feathers. This allows their feathers to be in top condition. As a result, they continue to have the ability to keep them insulated and to offer protection from the water. The bills are used for preening and they often will go get oil that is secreted from the tail with the bill. They can then distribute this oil among the feathers on their body.

They are considered to be very intelligent as well as curious about their surroundings. Penguins develop strong bonds to each other. In addition to communicating with sounds, they are often seen touching each other during social engagement. They will rub their bodies on each other and seem to crave the physical interaction.

It is true that many species of penguins select one mate for life. Should something happen to that mate, they may decide to be alone. After many years, they may make the decision to accept a new mate but not always. Females that no longer mate may still help to care for the young chicks of other members of the colony. 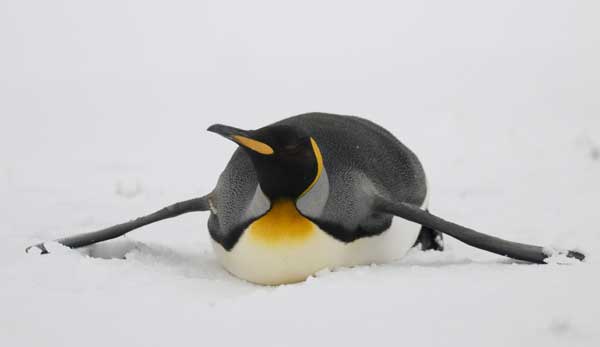 Penguin Sliding in the Snow

Some species of penguins have to travel extremely long distances annually. It is a grueling ordeal that has been well documented in the movie “March of the Penguins”. Watching such an event unfold gives an entirely new vision of just how difficult life can be for them.