If you take delight in the wonderful colors of a Parrot, then what is known as the Parrot Fish will also be fascinating to you. The size and the design of them though can vary based on their location. There are at least 90 species of them and there is still a great deal of information to be gathered about them.

You will find the Parrot Fish displaying colors of green, blue, yellow, red, orange, and pink. It is more than just the colors though that cause them to be similar to the design of a Parrot. They also have rows of tiny teeth and a face that is similar to the beak of that particular bird. They range in length from 12 to 20 inches long. There are a few species though can be just over 3 feet long.

The shallow tropical waters are where you will find them living. They also live in subtropical regions of the oceans around the world. They are found around the coral reef regions, and in beds of sea grass. The depth of the water they will live in depends on the corral. They can move around large areas looking for food. 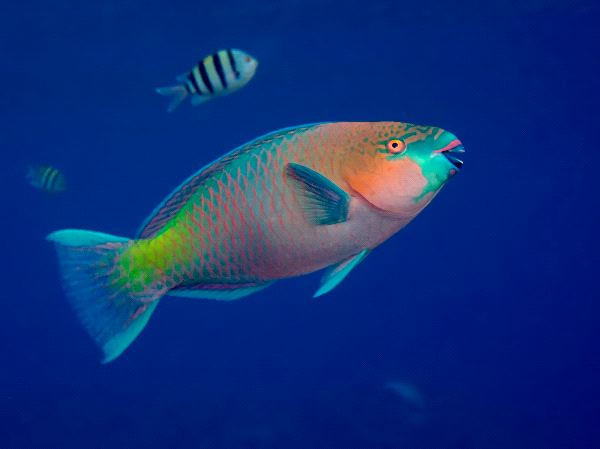 The Parrot Fish plays a very important role when it comes to the issues of bioerosion due to their feeding habits. They use the sharp beak to be able to remove algae from rocks. This helps with the production and maintenance of the coral sand for the reef biome as well. They grind up small rocks while eating and when they excrete it, they create sand.

They form very large schools that can be found moving about in the water. The smaller fish are on the inside of the school with the larger ones around the parameter of it. The males are dominant and they will have the females fighting over being around them in the school at various times. The males often challenge each other for overall dominance of the school.

For protection the Parrot Fish covers its body at night with mucus. This allows it to become attached to something in the corral areas for protection. The mucus also prevents this fish from having scent that predators could be attracted to. Experts believe that mucus can also help to prevent parasites from using this particular fish as a host.

As mentioned above, the Parrot Fish consumes a great deal of algae from its environment. This is a process that helps to keep a natural balance of elements in their environment. The fact that they feed on so much algae is why people often assume they are herbivores.

Spawning occurs in the shallow waters. Thousands of eggs can be released into the water by the females and the males will fertilize them with sperm. The eggs will attach to the plankton where they will remain until they hatch. Then they will swim around the coral.

The colors of the Parrot Fish will change several times over the course of their lifespan. The offspring are almost always females to begin with. However, some of them will change into males as time goes on. Experts don’t really know what causes some to change and others not to, but it is a fascinating way for the species to be able to keep a balance of gender in the population. 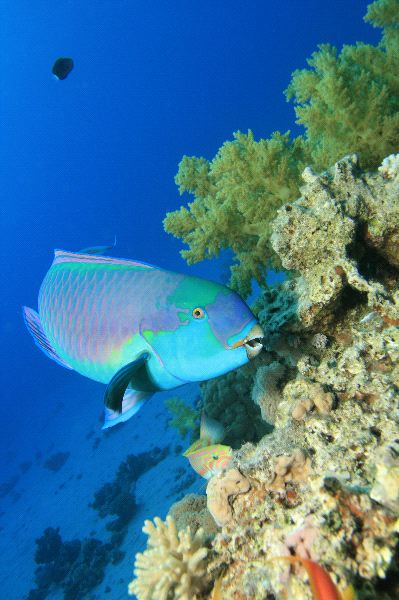