The social structure of Otters is one that seems very complex from the outside looking in. Yet as you explore it more you find that it really is simple and even fun. There is quite a bit of conflicting information though about their social structure. This is because they tend to have many elements of it. They don’t always do the same thing so what people observe at a given time is what they believe to be true. It is also noted that different species have different behaviors that pertain to their social structure.

They can swim on their stomachs as well as on their backs. It really depends on if they are just messing around or if they are seriously hunting for food. The flexibility of the body design as well as the fact that their fur is so loose gives them the freedom to move about that many other animals don’t have the benefit of.

You will notice that Otters spend a great amount of their time grooming their bodies. Some people find this to be boring to watch. The reason why they do this though is that their fur is so vital to their survival. They have to keep oil and other substances off of their fur. Otherwise they won’t be able to stay warm enough in the water and they can die.

Some otters live in large groups while others live completely alone or with only one or two others. It depends on the species of Otter as well as where they are located. They can live in groups that are up to 100 in size called rafts. There is a great deal of segregation among these groups though in regards to social structure. 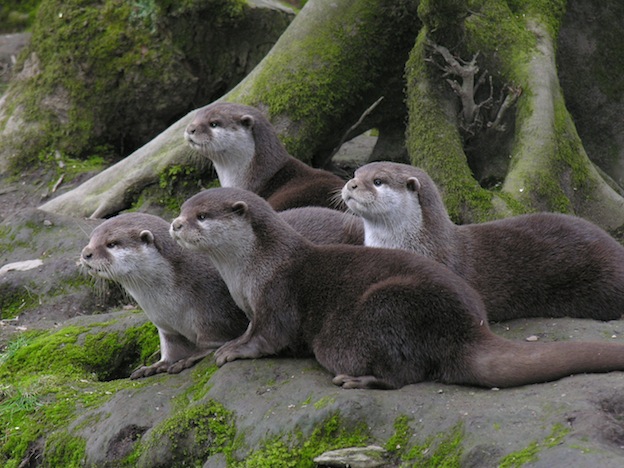 Otters spend several hours a day sleeping, and this generally takes place on land. They tend to sleep alone, away from the rest of their raft. The exception is the pups who will sleep with their mothers. Not all Otters sleep in dens though so don’t be surprised if you find the sleeping on the ground or on rocky edges. Sometimes you will even notice some species of Otters sleeping on their backs in the water.

Otters do enjoy the socialization of their raft as well as the safety of it. However, they are also independent creatures that like to be on their own as well. This is why you will see them out there exploring and being curious on their own. They love to explore and that makes them very different from many animals. Instead of following a given routine they tend to try new things and to be very creative.

Most people don’t think of animals such as the Otter as their own person. However, research shows that there are many indicators that each of them is very different. The biggest one is that each of them has a scent that is slightly different then all of the others. This will influence where they are in the social structure as well.