Otters are ready to reproduce when they are from 2 to 3 years of age. The season for mating depends on the region where they live. If there Otters habitat is thriving with enough room for them and plenty of food then they may mate more than once in a give season. The males are the ones that seek out the females when they are ready to mate.

Otherwise the two sexes generally stay separated with the exception of the young males remaining with their mother for a few years. While the males and the females don’t live in the same rafts, they don’t seem to show aggression towards each other when their habitats overlap either.

Research shows that a female Otter may be ready to mate again as soon as she has a litter. However, they usually won’t in order to continue caring for the offspring they already have. Should a mother lose her pup though she will have the desire to mate again very soon as long as she isn’t living under stressful conditions.

The males will start showing up in the areas where the females have territory during the mating season. However, the approval for the mating to take place is given by the female. If a male doesn’t get the warm reception he was looking for from a female he will move on to find another one. 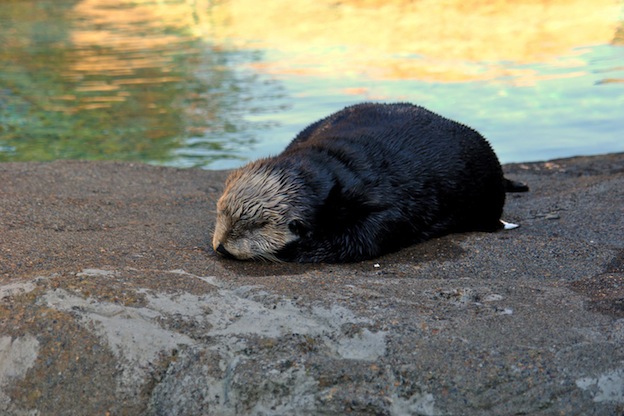 A young otter sleeps in the shade beside a tide pool

One way that females show their interest is by rolling around with the male. This type of playful activity is one that will also increase her level of hormones being released. He may also bite the nose of the female as a way to say he is interested. This type of courting takes place on land. However, for the actual mating process the Otters move into the water.

Depending on the species, it takes from 60 days to nine months from conception to the time when they pups will be born. From one pup to six will be born at a time but sea otters normally have a single offspring. They are born throughout the year. They young will feed from their mother for about the first 12 months of life. Some species are weaned earlier though at about 8 months of life.

The females are very good caregivers to their offspring. They may spend up to 8 hours each day just nursing them. These young Otters consume a great deal of milk each day in order to grow rapidly. They are also seen playing with their offspring, teaching them valuable skills, and protecting them with their own life.

When the pups are about four months old they will be introduced to solid foods. They will learn the basics of how to hunt for food on land in and the water by their mother. Even with the excellent care provided, pups are very vulnerable during the first year of life. Approximately 32% of them won’t live to be a year old. Statistics also show that less than 25% of the females live to maturity in order to mate.