Otters are found on every single continent in the world except for Australia and Antarctica. They enjoy the freshwater but they are also known to live in the saltwater of the oceans as well. Other places you will find them lingering include around rivers, streams, and lakes. They tend to stick to the shallow waters so that they can easily reach land when they are ready to.

You will find the Otter living in areas close to water. They make their home though on land that is called a holt. They live in regions where the water is extremely cold. Thanks to the design of the layers of hair on their bodies the skin is actually kept warm during this process. This is one of the reasons why Otters are believed to have been able to survive for millions of years. Sadly, it is also their fur that has led to humans destroying them.

Otters prefer to live in bodies of water that are close to land offering them wetlands or the woods close by. They even love to live in swamp and marsh areas. They are able to stay well hidden in these types of environments which makes them less like to fall victim to a variety of predators on land. They also stay very close to the shore of the water so that they can avoid common water predators as well.

They will make burrows in the land around the water. They are also found in dens that beavers may have left behind. Some of them like to make a nest from branches and twigs along the rocky edges. Others are found digging burrows in the sandy shores. Otters are very protective of their little habitat though that they have created on land. They don’t tend to be territorial though when they are in the water.

To help mark their habitat on land they will purposely leave droppings behind. If you are in such an area and smell what appears to be fresh cut hay you will know what you are really smelling. However, it isn’t uncommon for them to travel great distances on land or through the water. 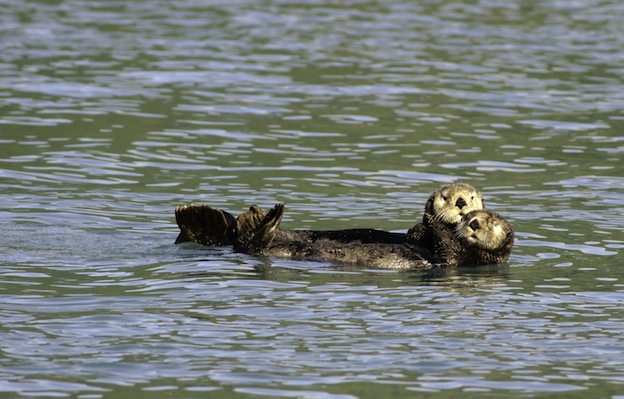 They may go to them occasionally but always return to what is called their home range. This can be up to 10 square miles though depending on where they live and how many people are in their raft. It is also important to not confuse their home range with their territory. The actual territory that is distinctly their own and not belonging to their entire raft is very small.

Some assume that Otters migrate due to these types of movements. However, that isn’t true due to the definition of migration that is used by experts. It is hard to get an exact number of Otters out there though due to them hiding on land and spending so much time in the water. Add in their frequently movements and that makes counting them more than once or at all a huge challenge.

One way to learn if there may be Otters in the area is to survey the surroundings. In addition to the dens that are in the ground they may be stockpiling things. For example they may have gathered large mounds of dirt, gravel, sand, grass, and even mud.

Not all of the habitats where Otters live though are a good environment for them. This is why there are concerns about their survival. For example many of them end up dying due to parasites found in the water. It is believed they come from a variety of fish that reside in those same waters.