What do Otters Eat?

Otters eat from 15% to 25% of their body weight each day. They can spend up to five hours each day finding the food that they need in order to survive. Those that have offspring may hunt more because it takes a great deal of milk to feed their young. A female Otter can spend up to 8 hours a day nursing.

Generally Otters will hunt in the early morning and the late afternoon. However, some species are nocturnal which means that they will do their hunting at night. Some species will vary in what they do depending on where they live. They may find that there are more opportunities to find food during the day than at night or vice versa.

The primary source of food for the Otter is fish. The types of them will depend on the season as well as where they happen to live. They aren’t picky eaters though as they will consume just about anything they can find to survive on. Some other common items that they will eat include invertebrates, birds, and small sized animals. This includes frogs, crayfish, and even crabs. They will also consume lizards and other items they can find on land when they need to.

The whiskers on the face of the Otter are very sensitive and they pick up vibrations. This is one of the main senses that they rely upon to find their prey in the water and on land. They also use their vision and their sense of touch to find food sources. They can be very creative too when it comes to hunting which is why they are so interesting to observe with this practice. 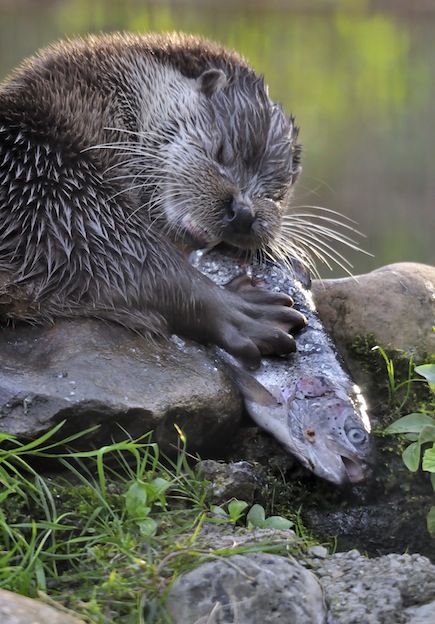 Watching Otters chase their prey is fun because they are so very active. They tend to hunt more in the water than on land because it is easier for them to do so. They hunt in the water as they are floating. This also helps them to conserve energy. They use their retractable claws to quickly grab and kill their prey. They have very fast reflexes so they tend to be accurate with catching their prey.

Otters are able to dive up to 300 feet in order to find food. If they can’t get the shells of their prey open with their claws they will pick up rocks to smash them. This is just one example of how incredibly intelligent they are. They will often feed on fish and other small items in the water. If they need to break open shells or they have large prey then they will drag it to land to feed on it.

The feeding habits of the Otter though aren’t the best for such an animal according to researchers. Many of these animals end up dying due to liver problems, kidney failure, and digestion problems. Others starve to death due to their teeth being broken or worn down. They then can no longer eat sufficiently in order to survive.

This is one of the reasons why Otters in captivity tend to live longer. Their diets are closely monitored. They can also get health care for problems with their kidneys and liver. Food can also be softer for them so that they don’t wear down their teeth like they do in the wild. The fact that Otters do need to consume so much food each day though is a prime reason why they do have health problems with their stomachs and their vital organs. Some of them will even get parasites into their bodies from the prey that they consume. This can lead to a very slow and painful death.