Otters are adorable creatures that live both on land and in the water. They are often mistaken for beavers though. They live mainly on land that is very close to bodies of water. They hunt for food both in the water such as fish and then also land creatures including small reptiles. They are small animals that average about four feet in length and up to 30 pounds. There are 13 identified species of Otters known.

Most people find the Otter to be a friendly looking creature. They tend to leave humans alone so they aren’t a threat if you happen to come upon one. However, they can bite and they can fight with their tails so if you are provoking an attack then you have been warned.

They have been around for at least 5 million years based on early fossil remains. They are found in very diverse locations and even small bodies of water. The future for some of the species is in danger though due to hunting and due to the destruction of their natural habitat. Many of them can’t find enough food to survive or the waters around them are polluted which results in them becoming very ill.

For small creatures though they do eat quite a bit. They can consume up to 20% of their body weight daily. When a female is nursing she will consume even more than that. About 5 hours a day are spent searching for and consuming food. Otters have to be highly adaptable too so that they can find the food sources out there. If their natural habitat isn’t providing enough then they will have to move to a new location. 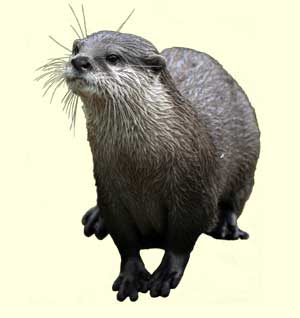 The anatomy of the Otter allows it to do very well both on land and in the water. This is one of the reasons why researchers feel it has been able to adapt to changes in the environment so well. Since they aren’t completely dependent upon one of these habitats for food or living they can change their habits to deal with what is offered around them.

Most Otters are very social and the have a great time with each other. They are quite playful so people tend to want to observe them. Some of the common activities include climbing up hills and sliding down them as well as wrestling with each other. They also can create tools from items in their environment that they play with and that they use for protection.

Since Otters live in so many different locations, it is easy for them to be observed. Still, there is more research that needs to be done about their abilities to adapt, survival skills, threats from humans and other animals, and their communication with each other. However, there is still a great deal that we don’t know about them.

There are some Otters in captivity and they tend to do just fine. They aren’t expensive animals to care for either. Plenty of research information has been collected from those in captivity. Of course that has created so tension though with various animal rights groups. They don’t feel the Otter should be in captivity unless there are health concerns that prevent it from being able to live on its own in the wild.

The efforts over the years to protect the Otters have mostly been successful though. Several species remains in real danger right now while a handful of others are considered to be vulnerable. With plenty of conservation efforts in place right now though there is a very good chance that we will see these creatures surviving well into the future.