The Ostrich belongs to a very large species of birds. It is very large and while it does have wings it doesn’t fly. It is native to Africa and there have been fossil remains found that show million years old of existence. The eggs that they lay are larger than those of any other birds. Ostrich live in groups called herds but many people call it a flock since that is what other groups of birds are called.

The legs of the Ostrich are very long and they are also very powerful. They rely on them for walking and for running. They will do all they can to remain undetected in the wild. This includes lying down with their legs folded their heads down. Their light coloring allows them to blend into the sand around them.

When they must run they will do so in order to escape dangers. They can go at top speeds of 45 miles per hour. They will stand and fight if they feel backed into a corner. Those powerful legs with claws give them a good chance of winning too.

There are many types of habitat that the Ostrich will live in. They do prefer the warmer climates though with lots of sand around them. 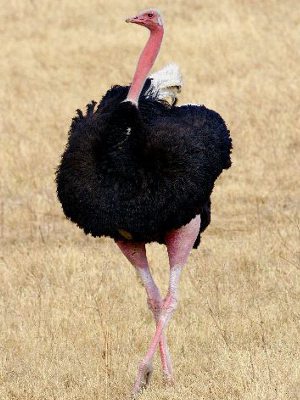 However, they have been identified living in some colder regions in the wild as well. Their bodies tend to blend in well with their surroundings and that is what they use for shelter. They will kick with their feet and use the claw on each foot if they have to for survival.

They won’t spend all of their time in the flock. They will spend time in pairs or alone during the winter months. They will be in their herds for mating and during drought. They will place all of the eggs into the nest of the dominant female as a means of being able to protect them.

The social structure for these birds is very interesting. They have a dominant male and a dominant female. When it is time for the eggs to be laid they will place them all into one large nest. The stronger females get to put their eggs in first so that they will have the most protection from the elements and from predators.

Ostrich are usually awake and active during the day. However, they may be out at night when the moon is light. They are very intelligent and they can recognize predators from a very long distance. They have keen hearing and vision. They can also be more than 9 feet tall so they can see above areas where other shorter animals have a disadvantage.

The Ostrich is certainly one of the most original types of birds out there and quite different from their ancestors. They continue to be in large numbers in the wild but that wasn’t always the case. Due to the desire to use them for food – both meat and eggs, and the fact that the hide is used for leather and their feathers are used they were hunted extensively.

Commercially though the prospect of raising Ostrich for money seems like a very good investment. Today they are such farms in more than 50 countries out there. The demand for leather goods is the biggest reason for such farms. It is believed that the leather produced from them is the best quality a person can buy. The cost to raise them is moderate and the prices for their hides is high so it can be a very profitable business.