The habitat and distribution for the Ostrich is very diverse. They are found all over the world in the wild. They are also raised on farms in at least 50 different countries. The Ostrich has been around for more than 120 million years. This shows that they are able to adapt well to changes in their environment.

Most people think that the Ostrich only lives in the dry desert locations. They mainly do around African and other locations. They are able to walk well on the sand due to the traction of their feet. They also use the sand to help them blend in well to their surroundings.

However, the Ostrich is also known to live in colder regions as well. That is where many people would never guess for them to be. Another place that you wouldn’t expect to see the Ostrich living is in the equatorial forest zone. They live a nomadic lifestyle so as long as they are finding food, water, and shelter they will continue to inhabit various locations.

As there are environmental changes around them they will adapt to other living conditions. They can survive on plant life and that is their main source of nutrition. However, they also eat insects and lizards when they are available. As a result of this diverse diet they are able to further expand their different habitats and distribution areas.

The dry grasslands may seem like they don’t offer enough for the Ostrich but they do. The fact that they don’t really need very much water at all also makes that a prime location for them to live in. During the drought they are more likely to live in larger groups. It helps them with their overall survival compared to when they live alone or in pairs. 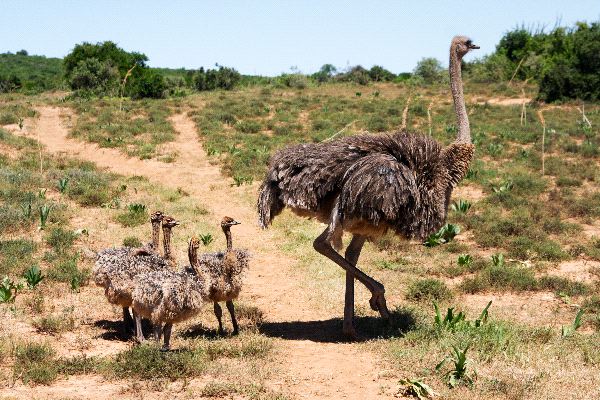 Due to the diversity of habitat and distribution tracking devices have been placed on some of them. This information allows researchers to see how far they have moved in order to find food and shelter. Observing them in the wild gives us inside information that we often don’t get. The living behaviors and locations are very different than what happens in captivity.

It can be tough to get too close to the Ostrich though due to their changing behaviors. They can become very aggressive during mating season and when they are trying to protect eggs. Still, plenty of tools that we have in today’s technology have allowed us to be able to learn a great deal about the habits of the Ostrich.

There is no denying that they are very intelligent and healthy creatures. They can travel long distances if they need to in order to find food and to have a safe place for them to reside. They often live around various grazing animals and it is a harmonized relationship.

From being around antelope, cattle, and other animals they find plenty of food that they can eat. They also are the eyes and ears for those other animals in terms of offering them a warning should there be dangers of predators all around them. Seeing how they are able to blend in well to their environment though makes the reality of why they have been able to thrive for so long out there in the wild come to life.

Due to the demands for goods that come from the Ostrich including leather, feathers, and meat many Ostrich are raised on farms in captivity. They seem to do very well in such conditions. They eat a diet that offers them a variety of nutrients so that they are able to grow faster and thrive. They do well in small groups or in large ones just like they do in the wild.