Many people think that the Ostrich only consumes vegetarian diet foods but that isn’t so. That can be most of it but not all of it. They do consume some insects and lizards too. Those that are raised on a farm will have a different diet too. The idea is for it to be nutritional and for the meat that is offered from these birds to be as tasty and nutritional for humans as possible.

There are many different feeding programs that are offered for the Ostrich. The differences can affect the results of the food items that come from a given farm as well. Ostrich meet is known to be very lean and to have very few calories and that is what often entices consumers to try it.

On farms they are given substantial amounts of supplements so that they can grow faster and leaner. This is a strategy that enables them to be more valuable in terms of the meat that is harvested from them. The diet can be a mix of greens with supplements in them that will also reduce the amount of food that each Ostrich consumes on a daily basis.

Grains such as alfalfa and wheat are very often used.  They like to spread the food out too so that the Ostrich have lots of food to peck at. Studies show that when there are pellets or other types of food items on the ground that is what they will focus on. When there is less food around the birds are more likely to become problematic in terms of behavior.

Chick starter is a common item given to the young due to the high amount of protein in it.

This is why so many Ostrich farms tend to have separate units for the younger chicks and the adult Ostriches. Vitamin and mineral pre mixes are often added to the feed at least once a week so that they can get enough calcium like they would in the wild.

In the wild roots, leaves, and flowers will make up the majority of the food supply for the Ostrich. They will have a diet that varies based on their location and the time of the year. They are opportunistic so they will consume foods that are in front of them rather than passing it up. 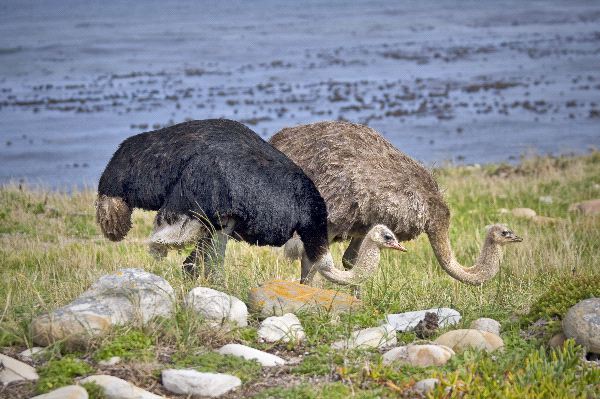 They tend to graze instead of eating it all in one area. This process helps to ensure that there will be such food items that grow back again. Since the Ostrich is very tall it can eat food that is higher up than other animals as well. This is to their advantage because they can eat lower too when there isn’t much to consume up top.

The Ostrich will take advantage of various rodents and insects that they find in the wild too. They have to be able to swallow what they get in their beak as they don’t have any teeth. They may also eat berries that are seasonal. Sometimes seeds are available too and they will eat them.

The Ostrich does need some water to be able to survive. During periods of time when there is a drought they will be less likely to consume as much food. During mating season the females may consume more food but the males will be more interested in finding a mate than in dining.

It can take up to 36 hours from the time an Ostrich eats to when it has been fully digested. They have three stomachs that the food goes through before it enters the intestines and can be used for nutrition and energy.