While the Ostrich is a bird, it certainly has a body that is very different from others. One of the significant differences is their very long legs. They can grow to be up to 9 feet in height. They can also be up to 350 pounds. Of course a bird that heavy isn’t able to fly. Even smaller Ostrich don’t fly.
They have wings that they use to help them stay balanced as they run. They don’t use those wings to fly though like other birds do. The wings have thick feathers on them that keep them warm and that allow them to dry off. The feathers are very detailed with thick layers of feathers. They also use them to help with courting or to fight off each other.

They have a thick breast plate that protects their vital organs. Since they are very thin along those parts of the body such as the heart and lungs they need that additional level of protection.

The respiratory system offers lungs and air sacks that go from the thorax to the bones. Most of their bones are solid. However, those in the legs are thick and that allows them to have the sheer power that the use for running and for defense. They breathe very rapidly as a way for the panting to help them cool down. They can also use their wings to help them with cooling down after they have been moving for long periods of time.

They have nostrils at the base of the beak and that is different from the design for other species of birds. They have a very long esophagus that runs down the right side of the neck. They have a large jugular vein on the right of the neck as well. They have very good eye sight and that allows them to notice a great deal about their environment. 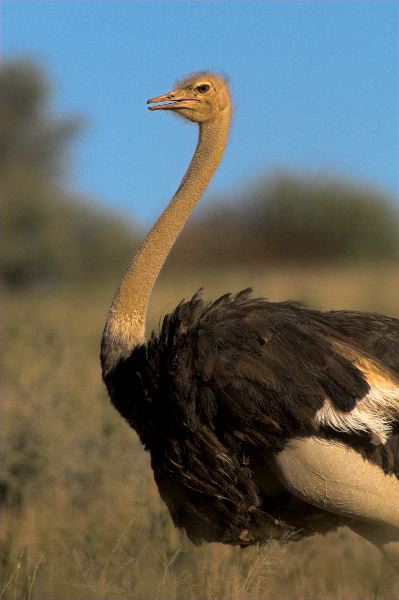 Portrait Of An Ostrich – Ostrich Anatomy

They are mainly active during the day so they can’t see very well at night. However, sometimes they will be active when the moon is very bright. That allows them to have enough light to see. They also have excellent hearing which gives them a chance to escape from danger.

They have two toes on each foot and one very sharp claw. The toes are designed to help them stay balanced. The claw helps them to have more traction and it is also used to fight off predators. They are able to run for long distances at maximum speeds of about 43 mph.
They don’t require a great deal of water to be able to survive. They do need some of it though for them to be able to survive. Food is digested through their stomachs. They have three of them and the food moves from one to the next. The first one is a storage location for the food that an Ostrich consumes. The second one helps to break it down before it moves into the small intestine.

The immune system of the Ostrich is one that researchers are very fascinated by. Experts believe that they have the best overall immune system of any living creature on Earth. This doesn’t develop though until they are fully mature. Some experts are hopeful that by studying this immune system they may be able to help humans reduce serious health issues.