The world of primates has always been a fascinating world to humans. They are so similar to us and the more we study evolution and ancient history the more we are confronted with just how similar the species are. Whether you’ve just seen some at the zoo or picked up an episode of the National Geographic there’s good reason to learn all you can about the different orangutans. These beautiful red-haired apes have a resemblance to people that earned them the nickname ‘man of the forest.’

One of the most interesting facts you’ll come across in an introduction to orangutans is that they are endemic from Asia. There are two different species; the Sumatran and the Bornean orangutan. The Bornean can also be divided into three subspecies. They diverged on the evolutionary tree from the rest of the great apes about 15.7-19.3 million years ago.

You wouldn’t really be covering an introduction to orangutans if you didn’t discuss some of their feeding habits. Their diet is primarily made up of large portions of fruit. In particular they like to eat Durian fruit but will also dine on Rambutan and Jackfruit. The large males will spend a great deal of time on the ground foraging. In specific they like ants and termites.  Though they do get a lot of water from their fruits they eat, they will also be near a water source to insure they get enough water. They also enjoy eating honey and bird eggs on many occasions. 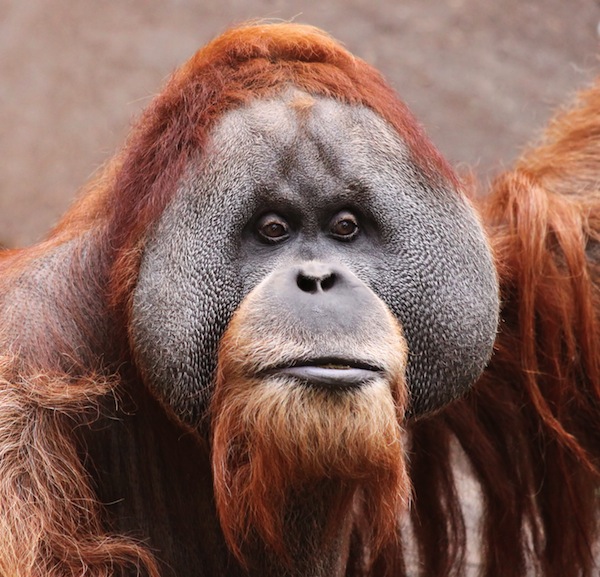 The orangutan is native to Malaysia and Indonesia. They are most currently residing in the rainforests of Sumatra and Borneo. They are arboreal and a proper introduction to orangutans couldn’t be done without at least talking about the fact that they are tree-bound nearly all of the time, more so than any other of the great apes. They are more solitary than other great apes, preferring to live on their own much of the time. Social bonds and groupings mainly happen between a mother and her offspring. These primates will spend most of their lives in the trees. At night, they will build a very elaborate nest so they have a good spot to sleep. An introduction to orangutans will also point out that of the great apes they are capable of moving through the trees the fastest as well.

One of the reasons that the orangutan gets on the endangered species list and stays there is that they are very slow to reproduce. Females often won’t have their first offspring until they are fourteen years old. After this, they might not have another infant for at least six years maybe even as long as eight. These long periods to bring forth baby orangutans usually only result on the birth of one baby. Because of this, replacing even just one orangutan can take years.

When covering an introduction to orangutans you should also discuss some of their mating habits. The males don’t mature until they are close to fifteen years of age or more even. The male’s cheek pads do mature much slower than one would suspect. Much of how quickly the cheek pads will develop is decided by whether or not there is a male in the area and if he is aggressive.

Female orangutans have a gestation period that lasts about nine months and when their young is born it wills stay clinging to the mother; belly to belly for nearly four months or longer. Males don’t really play any role in raising the young. At about the age of two a baby orangutan can begin ‘buddy travel’ this is where they can swing through the canopy while holding hands with another adult orangutan for safety.

The orangutan is one of the most intelligent primates in the world. There are studies that show they can use representational strategy and solve invisible displacement problems. The Sumatran orangutans at the Zoo Atlanta have access to a touch screen where they are able to play games and they do. The primates have many sounds that they use to communicate with each other and can also easily blow raspberries. A baby orangutan will make soft hooting sounds of distress when a stressful situations pop up. They will use branches with leaves to protect themselves from the sun and the rain. In Borneo you may see the orangutans on the ground more often and it is speculated that this is due to the fact there aren’t tigers in the area.