Orangutans can be divided into two species: Bornean and Sumatran, and both of these have very similar processes of reproduction although the exact lengths of time can vary slightly between the two species. Because orangutans are mammals, their reproduction process is very similar to that of humans from the gestation period to the birth and even the process of caring for the infant after the birth occurs. One important thing however is that for the mother orangutan, having a baby requires a lot of effort as it can be challenging to feed themselves, but even more so to feed a infant as well. Because of this orangutans, like humans, focus on ensuring the survival of a few children as opposed to having many babies, only a few of which will survive.

Like all animals, an important part of the reproduction process for orangutans is courtship. Adult males can be divided into two groups: flanged (those with cheek pads) and unflanged. The flanged ones are more desired by females while unflanged males will have much less success in mating. Males, on the other hand, will generally prefer to mate with females who have already have a child as this shows their fertility. During the courtship stage of reproduction, males will use long calls to communicate to females that they are looking for a mate and at the same to get rid of any competitors. Males will also produce a musk that attracts females. Usually during the courtship process the male and females will remain together for just a few days with the male leaving once the female becomes pregnant. 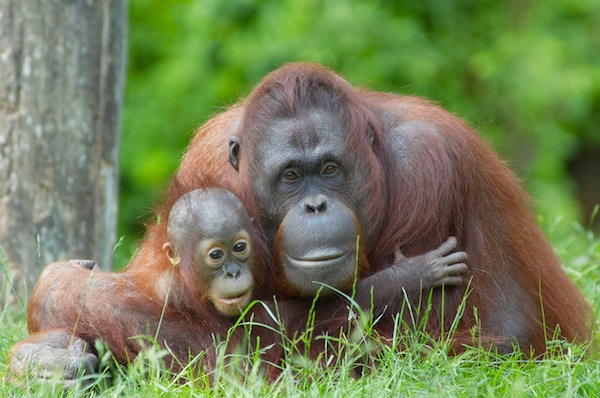 Mother orangutan with her baby

In both species of orangutans, reproduction begins for the females between ages 10 and 15 although for Sumatrans 15 is average. Despite this, their reproductive cycles can begin much earlier, between the ages of around 6 to 11. Male orangutans reach adulthood around 18 to 20 years old. Sumatran orangutans will usually wait between 6 and 10 years before having another child while Bornean orangutans who live in habitats of a high quality may have another child as soon as 5 years after the birth of the previous one. In both species the gestation period is usually around nine months, which is the same as that of humans.

As with all mammals, the reproduction cycle of orangutans ends with the live birth of the child. Usually when born, infant orangutans will weigh between 1.5 and 2 kilograms. Although they will grow to be much longer, they will usually stay under 25 kilograms until they are between 6 and 7 years old. When compared to the other apes, orangutans actually have the longest amount of time until they reach maturity and are able to participate in reproduction as it can take until they reach 14 to 16 years of age to have their first child. Because orangutans grow up so slowly, scientists have been able to divide their childhood into being an infant, a juvenile and an adolescent. 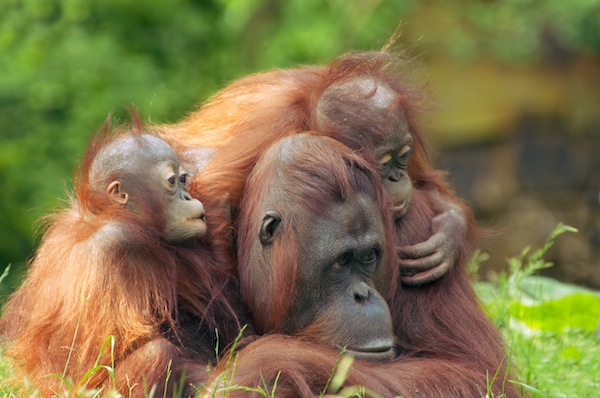 Mother orangutan with her babies

Due to the fact that the reproduction process for orangutans is so slow, the mothers will take the best care possible of their children. This means that during their child’s first year the mother will be in constant contact with them. When first born, newborn orangutans will need to nurse from their mother every three or four hours but when they reach four months of age, they are able to begin eating soft food that they take from the lips of their mother. They are generally weaned around age three although in some cases, they will continue to nurse for longer. The mothers will make sure to keep their infant orangutan within sight and reach for at least the first seven years of their life, helping guarantee their survival. Because the reproduction and growth process of orangutans is so long, population growth can be slow, making it hard for them to regain their numbers after losses due to habitat loss.