Orangutans are great apes that live in Asia. There are two main species and they are named for the regions they are common to; Sumatran and Bornean. They are native to Indonesia and Malaysia. There are many things you will notice when you look at an orangutan anatomy.

The Orangutan is a bulky, large ape with a neck that is very thick and strong. Its strong arms are some of the longest out there, reaching over seven feet. They have relatively short legs that are bowed and they do not have a tail. In comparison with the gorilla’s anatomy they are about 2/3s the size.

Most of an orangutan’s body is covered in long, shaggy hair. It is an apricot color but can vary greatly in its shade. It can grow quite long and give them an odd appearance when they are in the trees where they spend most of their time. 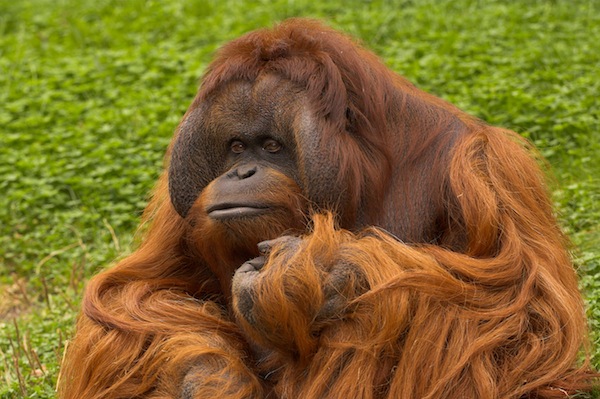 Their faces are mostly hairless but in the males some facial hair can develop even giving them a mustache around their prominent mouth. The males and females are built differently. The males have large flanges that are attractive to females. The flanges on their cheeks are mostly made of fatty tissue and then supported by the facial muscles. They also have large throat pouches to help them make calls that can be heard for quite a range. The species is considered to display a degree of sexual dimorphism with the females being much smaller and less strong.

Unlike other apes, Orangutans spend the vast majority of their time in the treetops. Being arboreal has led to the need for them to have flexible joins and hands and feet that are agile. Their hands are very similar to a human’s hand with four fingers that are long as well as an opposable thumb. Their tendon and joint positions make the hand particularly well- adapted to arboreal movement. When in the resting position the hands curve naturally forming a hook that grips to branches keeping them easily in the tree tops. With the additional use of the thumb the hand and fingers are able to tightly grip objects with a tiny diameter. It is done with a simple resting motion.  Moreover, even without using the thumb, the hand and fingers can grab small objects tightly in a double locked grip.

The hip joint of the orangutan has the same movement capabilities as the shoulder joint making them much more flexible than humans.  The orangutan’s arms are one and a half times longer than their legs.  They are not as strong as a gorilla but are about seven times stronger than a human male. They are primarily arboreal so use their shoulders and arms for movement more than they use their hips and legs.

An orangutan will often be seen carrying things in their strong jaws so that their feet and hands are free for climbing. The muscles and bones in their jaws are strong enough to crack large nuts as well as ripping off tree bark. Because they spend so much time in the treetops they have learned to utilize all four appendages as well as their mouth.