The color of the Olive Ridley Sea Turtle is gray and green. As juveniles they feature more of the gray coloring and then as they reach maturity they will be green. They feature a shell that is heart shaped. They have anywhere from 6 to 9 pairs of costals. They also have 2 pairs of front scales. There are claws on the front flippers that aid with digging. However, the females are the only ones that dig because the males won’t go to the shore. The males have a tail that is visibly going to stick out but the females don’t.

Most of the Olive Ridley Sea Turtles are found in the Pacific Ocean around the beaches of Mexico. They can be found in smaller numbers though in plenty of other locations out there. This includes around the areas of South America and West Africa. They have been spotted in the North part of Chile and the South part of California as well. When necessary they may go to the cooler water areas, and they can survive by slowing down their metabolism.

The wide distribution information about these sea turtles stems from the fact that they migrate hundreds of miles annually. They do so to find mates, to get to their nesting grounds, and often to find food if it is scarce in their normal location. Some studies indicate travels several miles for migrational purposes. This is one of the few species that the known migrational patterns have been seen.

As is the case with other species of sea turtles, there is so little information about their behaviors. The males and the young don’t come out of the water but they may be seen in the swallow areas along the coast. The females though are very determined when it comes to getting to shore so that they can deposit their eggs. In captivity, they have sometimes exhibited cannibalistic behaviors. 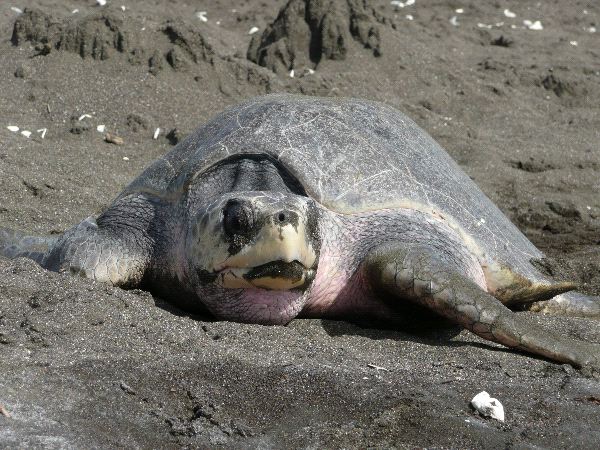 There are plenty of sources food for the Olive Ridley Sea Turtle to consume. They include jellyfish, crab, shrimp, and lobster. When they are finding it hard to locate these sources of food or enough of it, they will consume algae.

This species of sea turtle is about 15 years of age when it takes part in mating. The females are able to mate once or twice per year. There isn’t much information known about the mating rituals for the Olive Ridley Sea Turtle. Once mating has occurred the female will have the responsibility of getting the eggs to the beach.

She will dig there and deposit a clutch of up to 100 or more eggs. What is unique with this species though is that the females will work as a team. They will create a very large nest and put eggs from several of them into it.

The eggs will remain there for about 40 to 50 days. Then the young have to try to reach the water for survival on their own. The females will return to the water as soon as they have deposited the eggs and covered them up to protect them. They can live as long as 50 years in the wild. 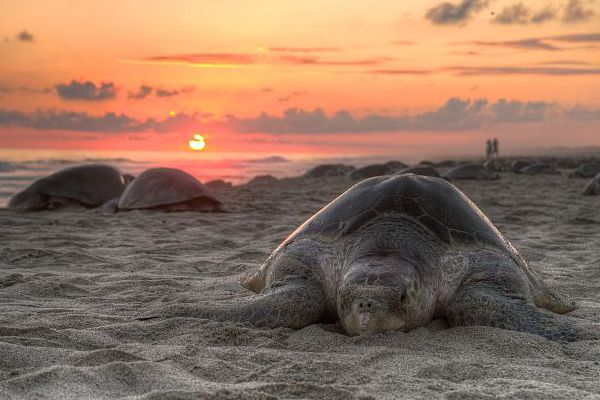 There aren’t as many conservation efforts in place for this sea turtle as for other species. It is believed that their current population right now is about 800,000. One of their threats is that these sea turtles are often used as a source of meat in many locations. The eggs can also be taken and consumed as a delicacy. They have also been killed for the use of their shells.

Fishing nets intended for other forms of aquatic life often severely injure or kill these sea turtles. One of the biggest problems continues to be pollution in the water. It makes them very susceptible to various types of disease.

They are placed on the list of endangered species though due to the risk of their habitat being destroyed. Some experts believe that if changes aren’t made, the Olive Ridley Sea Turtle can be on the verge of extinction in few years.  One of the main ways that such conservation has occurred is by noting the heavy migration routes. By limiting boating, commercial fishing, and other activities in those areas during the migration it has helped to keep these sea turtles safer.