Despite Salvador Dali’s legendary pet ocelot – a long-term companion who travelled with him for many years – they are, by and large, very shy creatures. They prefer to keep themselves to themselves.

Despite this, they’re well-loved creatures and claimed as the “favourite cat” of any number of feline enthusiasts. There’s just something about ocelots that appeals to people – perhaps their friendly faces, so reminiscent of the cats in our own homes, or perhaps some of the many tales about the ocelot that exist all over South America.

Not only do they bear a close resemblance to domesticated cats, they also have traits in common with plenty of other breeds and species of wild cats – they have spots akin to those of a leopard, rounded ears similar to those of the serval, and a limber build that gives them something of the look of a cat much larger. All the cats in their genus are small, lithe and spotted, and have often been hunted for their coats – to such a great extent that for a while, the ocelot was classified as ‘vulnerable’, the first category in the section of species described as ‘threatened’. Thankfully, new legislation was passed and in 1996 they were reclassified as being of ‘least concern’.

Despite this, the ocelot population is now once again in decline – deforestation, illegal hunting trade and small litters have all been blamed for this trend. 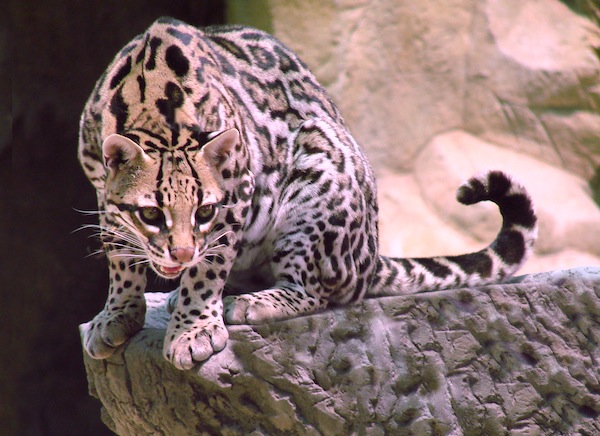 Ocelots are distributed extensively throughout South America and in some cases Central America, too – they can be found in the Amazon Rainforest, Argentina, Arizona, Bolivia, Colombia, Ecuador, Guyana, Margarita, Mexico, the northern Andes, Paraguay, Texas, Trinidad and Venezuela. Perhaps oddly, there are no wild ocelots in Chile.

They’re kept in captivity all over the world, and in some parts of America they’re kept as pets by skilled cat owners. They really don’t play well with other animals, though – whether of their own species or otherwise. They prefer to live in low, dense, thorny brush, such as is found in the dense forests of many of their natural homes. They can adapt perfectly well to jungle life, but they are not at all suited to claiming territory in open spaces without much cover.

Like many cats, the ocelot is solitary, territorial and nocturnal. They generally meet only to mate, though some spend their days resting in trees with other ocelots of the same sex who share territory borders with them. Territorial disputes are of great import to ocelots – they fight fiercely over their land, and sometimes to the death.

Otherwise, they’re actually rather laid-back creatures. They won’t challenge another ocelot on sight for any reason other than a question of territory, and their mating habits are amongst the friendliest of all wild cats. Sadly, this has given rise to a pet trade that is often cruel to the beautiful cats – they have all too often been declawed, defanged, descended and ‘fixed’ so that they can be kept as domestic pets by untrained individuals, which is never in the cat’s best interests.

They’re extremely nocturnal compared to some other cats of a similar type, and in the wild little to no ocelot activity has been spotted during the day. At night, though, they’re very active indeed – they’re thought to capture an average of one prey item for every three hours that they consistently travel, and they sometimes capture two or three prey items a night. Of course, this will depend on the time of year and the climate they’re in.

Like most cats in their size range, ocelots concentrate generally on smaller prey – rodents, lizards, turtles, amphibians, crabs, birds, rabbits, opossums and fish. Their eating of fish is particularly interesting; they’re much stronger swimmers than most cats, and one of the few that have been known to hunt in the water. They will even occasionally hunt monkeys, clambering into the treetops to locate their prey.

Mostly, though, they concentrate on small mammals and rodents for their food – which they hunt down via a combination of excellent night vision and a talent for following odour trails. 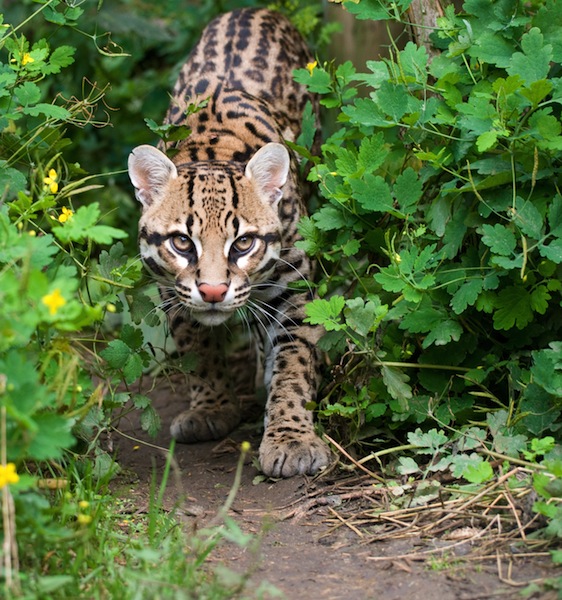 Unless they lose their litter, ocelots generally only breed once every two years. They don’t have a season, and are ready to mate at any time. Their mating habits are much less violent than those of many cats, particularly of roughly this size and type.

Once impregnated, the female ocelot finds herself a den – usually in a small cave or a hollow tree. After a pregnancy lasting approximately eighty days she will give birth to (usually) a single kitten, blind and barely furred. That kitten won’t open its eyes for well over a fortnight, won’t leave the den till after three months, and will often remain at its mother’s side for anything up to two years – despite the fact that after eight months they are relatively capable of hunting for themselves.