These are very long animals with large sized heads. They feature hair that is very dense. You will notice that they have extremely long whiskers as well. They have both claws and webbed feet that help them in the water and on land. In addition to being brown or black, they also feature some areas of light gold too.

The Northern River Otter is found both in Canada and the United States. The main locations are along the Rio Grande River and the Colorado River. They are highly adaptable animals so as long as they have access to enough food and water they can thrive. They tend to stick to freshwater areas including lakes and rivers. They do fine in both cold and warm temperatures of water.

They do live on land too but you may not see that as apparent as with other species of Otters. They are known to dig tunnels under the water that lead to their dens. This is just one more way that they are able to exhibit their amazing intelligence and skill.

The Northern River Otter spends its time living alone but they can form groups called rafts like most other species do. One of the moments that they will be together is during mating or when a mother is caring for her young pup. The females are wonderful with the young though. They play with them and teach them a variety of skills that help to increase their chances of surviving on their own.

They have a home range though that can be very wide. This is where they will explore and hunt. The home range of these Otters often overlaps with each other. Generally they don’t show aggression towards each other when they come into contact this way. Males will become more aggressive towards each other though when they are looking for females to mate with. 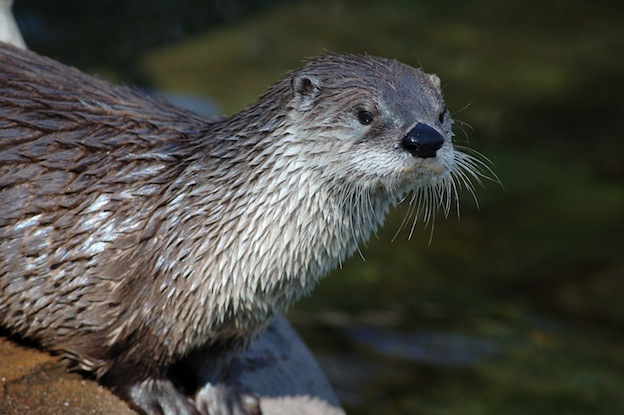 This species of Otter generally will hunt at night. However, there isn’t any set guideline to this and you will see some of them that do their hunting during the day. They can stay under the water for about 8 minutes as they search for food. They consume a wide variety of foods including fish, crabs, turtles, birds, and even eggs that they find buried on the land.

The males and females are always segregated with this species of Otter unless they are courting or mating. It isn’t uncommon for a single male to mate with a dozen females though during this time of the year. Mating can occur twice a year – winter and in the early part of spring. They are ready to mate between 2 and 3 years of age.

Generally the offspring will be born in about 60 days. However, depending on the living situation for the Otters it can be up to a year. Delayed implantation can occur which allows them embryo to attach to the uterus many months after the mating process has taken place.

Ongoing conservation efforts have been in place to reintroduce these Otters to their natural habitat in New Mexico. The Northern River Otter doesn’t do well in bodies of water with high levels of pollution. They either have to be relocated or they will end up dying there.

In the wild they can generally live about 8 years. They are about to live more than twice that long in captivity though. They have quite a few predators in the wild including coyote, alligators, and even bobcats.

The exact number of them that is left out there isn’t known. Many believe that the numbers are high enough that they aren’t in danger. Still, efforts are in place to protect their habitat and to keep the waters they live in free from pollution.