The Nine-Banded Armadillo weighs about 12 to 22 pounds. They can be up to 23 inches long. This is certainly a fascinating looking creature that people are very intrigued by. The tail can be up to 5-9 inches in length and they are very closely related to the rodent families.

The Nine-Banded Armadillo has a type of armor that covers the body. However, the underside of the body doesn’t have such protection. While most of them do have 9 bands of that armor, some have more or less depending on location.

Their skin is tough and they have course hair. All of this helps them to be protected from predators and from their environment. On their middle toes they have very long claws that allow them to dig with ease. They have very small teeth.

They are found in North, South, and Central America. Their diversity makes them the widest spread out there of all Armadillos. They are found living in various locations including the plains and in forest regions. They are mainly found in locations that are warm and that offer plenty of rain.

They are able to adapt well to changing locations and climates though. Today there are even some of the Nine-Banded Armadillo living in rain forests. They don’t do well in locations that are dry or that are very cold. They create a variety of different burrows that they move around in. They mark their territory with urine to keep others out. The males have larger territory and it is often for several females to have overlapping areas of that same territory.

They are nocturnal and they usually live a solitary life. This particular species of Armadillo can’t roll itself up into a ball. It can float across the river though by inflating its body with air. They can also sink to the bottom of water and walk across it. They have the ability to hold their breath under the water for up to 6 minutes. 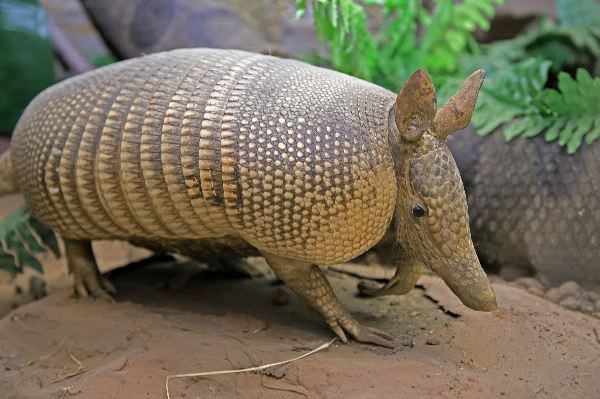 Insects make up the majority of the diet for the Nine-Banded Armadillo. They use their snout to forage for food. They push it into the loose soil and toss it around in various patterns. This will stir up termites, worms, spiders, and beetles. They will eat what they find using their sticky tongue to quickly lap them up before they can run up.

When that type of food source is low they will turn to small reptiles and various types of amphibians. They will consume food daily when they can find it. They often store up food for when they aren’t able to readily find it. Sometimes they will be out during the day looking for food. That is often a sign that they are struggling to find enough of it.

July through August is the common mating season for the Nine-Banded Armadillo. However, it can be much later due to region. The process of delayed implantation means that after mating the embryo can be attached later on so that it ensures the young are born during favorable conditions.

The gestation period is 4 months. There will be up to 4 young that are born. Their mother will have created a burrow for them to be born into. They will stay there drinking milk from her body for several months. Then they will venture out with here to find food. When they are about 6 months old they will separate and take care of their own needs. By the following mating season they will be ready to mate on their own as well.

The average life span for the Nine-Banded Armadillo is 12 to 15 years. 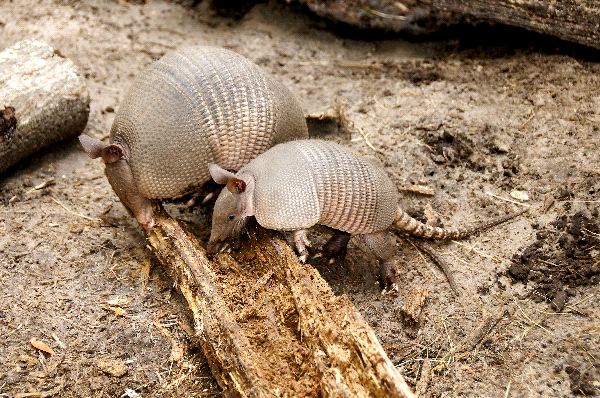