The Narwhale is a Toothed Whale, and it is medium in size. There are many legends about this particular species of whale due to the long tusk it features for the males. It has been called a magical creature in many stories and legends. They are closely related to Bottlenose Dolphins and orcas.

This is one of only two whale species that features a long tusk. It can be from 7 to 10 feet long. It sticks out from the left side of the top jaw. What is interesting is that about 1 in 500 males will have two tusks. Females also have a tusk, but it is substantially shorter and they very seldom will have two. It is believed that this tusk is a type of characteristic that helps to determine who will mate with who.

They have a coloring that features a black and white pattern. They are darker when they are born and then get lighter as they get older. The body is shaped like a cone and they have a very small dorsal fin that is more like a ridge. The head is very small and they feature a blunt snout. The flipper is round and very short. They only have two teeth, and both of them are located in the upper jaw.

This particular species of whale is able to live all year long in the cold Arctic region. They live in the waters of the Canadian Arctic and the waters around Greenland. They are also found in the Atlantic around Russia. Sometimes, there have been noted populations around Baffin Bay, Hudson Bay, and Hudson Strait.

They do migrate, but always stay in cold regions. In the summer, they are found closer to the coast lines. As the freeze of winter is upon them, they will move to the deeper water. They will live in areas where there is ice, but it is densely packed. They will make small holes in the ice. In the spring, there will be channels that open up and that is when they return to the bays along the coast.

The Narwhales are often seen in pods that can have from 10 to 100 members in them. However, they tend to stay in smaller pods unless they are migrating or looking for food. It is more typical to see them in groups from 10 to 20 members. The pods are often defined by current roles too. For example, there are male bachelor pods, pregnant female pods, and even pods of females with young calves to care for.

It is a myth that they use their tusks to break holes for breathing in the ice. They use their melon which is very thick. Sometimes, a group of these whales will work as a team to break up ice and create breathing holes. They are extremely vocal, using clicks and squeaks to help them effective communicate with each other.

They can remain under the surface of the water for up to 20 minutes. They do take part in deep dives that can be almost 5,000 feet deep. They can do this over and over again during the day. In the summer though, they tend to feed from the shallow coastal regions. Then, their dives are usually no more than 900 feet. They are very vocal, clicking and squeaking whilst traveling. 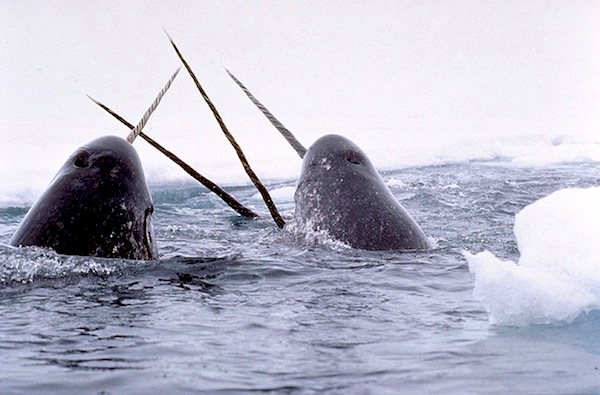 The Narwhale moves very slowly but also erratically when they are looking for food. They often feed on shrimp and squid. During the winter months, the Narwhale consumes flatfish. They find them under the layers of ice pack. They have a diet that is more specialized than other species of whales.

Greenland halibut, and Arctic cod are among favorites. They have been found to consume various fish and eggs. At times, rocks have been found in their stomach contents. This is likely due to them feeding near the bottom of the water. They only have two teeth though, so they rely on a suction type of mechanism for eating. A jet of water is used to remove prey and then they suck the food in.

The various mating rituals for this species of whale aren’t really know. The length of the male tusk could be an attraction that brings him the best female mates. Mating generally occurs from March until May. The females will give birth approximately every 3 years.

After mating, it takes about 15 months for the calf to be born. The birthing season is from July to August. They will drink from the mother’s body as she produces milk very high in fat. They are weaned at about 1 year of age. The tusks don’t start to grow until after the young have been weaned.

The newborn calf is able to swim at birth and is born tail first. They can be up to 5 feet long at birth and weigh as much as 180 pounds. The average lifespan in the wild for the Narwhale is 50 years.

For thousands of years, the Narwhale has been hunted by the Inuit people of Canada and Greenland as a source of meat. They are also hunted for their ivory, and this practice continues today for these cultures to be able to survive. With it being illegal to sell ivory, that reason alone for hunting has died down. However, on the black market it is still a huge commodity.

They are considered to be vulnerable due to changes in climate, their limited location, and their diet being so specialized. They seem to be very vulnerable to climate changes, and it is believed to be the cause of many unexpected deaths. However, they seem to have a constant population. There are believed to be approximately 75,000 of them in the wild at this time.