Old World Monkeys are the group that is found in Asia and Africa. Fossils have been found in Europe, and there are still free roaming monkeys in Gibraltar, though they may have been introduced to the wild there. Most of the common, well known monkeys are in the Old World Monkey group, such as baboons, langur, and macaques. Currently at least 78 species can be found in this group, which is divided into two subfamilies.

The largest being the male mandrill—females are a lot smaller—which can weigh up to 110lb and grow to be about 2.3ft in length. The smallest species in the group is the talapoin, which only weighs 1.5-2.8 lb and is 1.1-1.2 ft long. This is still considerably larger than the pygmy marmoset in South America.

Physical differences are also recognizable. Most notably, their tails are completely non-prehensile and in some species very small. Their noses are also narrow with nostrils that face sideways compared to the New World Monkeys with their flat noses.

All Old World Monkeys have opposable thumbs, except the colubus monkey, which only has small stumps, which aid in tree travel. All have eight premolars and most eat both carnivorous and herbivorous diets. Most monkeys in this group are not picky about food, and will eat a variety of plants, roots, seeds, nuts, insects, eggs, and other small animals. The exceptions to this are the leaf monkey, which lives mostly off of leaves and only eats a few insects and the Barbary macaque who usually eats roots and leaves and rarely eats insects.

Young monkeys are born after a gestation period of five to seven months. Most monkeys are single births, with rare twins. Unlike New World Monkeys, this group is largely matrilineal, often with only one male to a tribe or troop. Females have their own cycles of fertility, so young are not born seasonally resulting in monkeys of a variety of ages in a troop. Most often, males leave the group once they are sexually mature, leaving the dominant male in charge of the other monkeys. Some species have more males in a tribe, but there is a clear hierarchical line among the males.

Communication between these monkeys is very clear. Facial expressions are varied, and a number of other gestures express anger and aggression mostly. In general, this group of monkeys is more aggressive than their counterparts and less easy to tame. There are some species which can be trained and are often used for entertainment, but they are moody and never entirely domesticated.

Cercopithecinae are the subfamily that is found in Africa, except the macaques, which are found in Asia, parts of Africa as well as Gibraltar. The subfamily, includes vervet monkeys, baboons, and macaques. They are found in just about every terrain and can endure a wide range of climates. The Japanese macaque lives in the snowy mountains, while others of this group are found in the savannah, mountains, rocky areas, and rain forests. The species that lives mainly in trees have slim, delicate bodies with long tails, though they are still completely non-prehensile.

Terrestrial species are short, stocky, with very short or almost non-existent tails. All of the monkeys in this group have well developed thumbs, which they use not only for climbing, but opening seeds, banana peels, etc. This subfamily has pouches in their cheeks to store food, which is a diet mixed in leaves, seeds, nuts, mushrooms, insects, and small vertebrates.Life expectancy in this group can go up to 50 years old. Gestation is six to seven months. Young are fully mature within three to five years old. 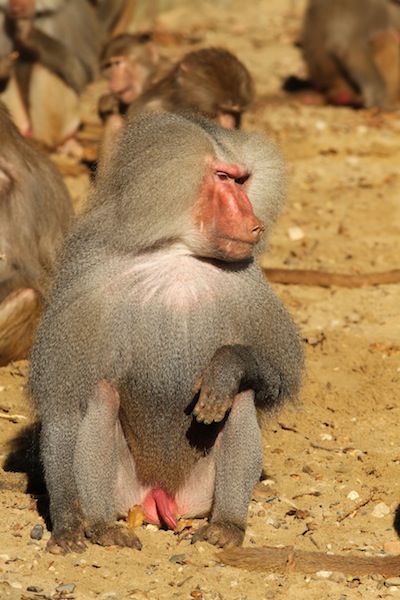 Colobinae make up the other subfamily that is found in Asia and Africa. This group is different in several ways, including the way food is digested. They do not have pouches in their cheeks, but have compartmentalized stomachs for better digestion. This group has middle sized monkeys with long tails. The young almost always have a different color than their adults. Different sized groups live in rain and mountain forests, mangroves, and savannah.

They do not live in deserts or arid areas; most live primarily in the trees. This group is primarily herbivorous, eating fruits, flowers, and leaves. Gestation is six to seven months, with maturity being reached at three to six years. Their life expectancy is shorter, at about 20 years.

While many of these monkeys come across as aggressive and will often fight for dominance, food, and territory, many are playful as well. The Japanese macaque enjoys bathing in hot springs, while African baboons will play and tumble on the rocks and hills. Females are protective of young, though some infanticide can be seen in some species where a new dominant male wants females free for mating sooner.