The roughly 53 species of New World Monkeys living in the tropical forests of Southern Mexico, Central, and South America. Most of these monkeys are arboreal, meaning they live and travel in the trees rather than on the ground. Because of this, less is known about these monkeys as they are harder to study. New species are also being discovered, so new factors come into play often.

These monkeys are also the only ones in the world that have prehensile tails, meaning they can use their tails to hold on to branches for balance and swinging. Other monkeys do not have the use of this “third hand” as their tails are either short or non-prehensile.

New World Monkeys are monogamous in their pairing and care for the young together.

The New World Monkeys are divided into five main families:

– Cebidae which include capuchin and squirrel monkeys

– Callitrichidae which include marmosets and tamarins

– Aotidae which include titi and night monkeys

– Atelidae which include spider, woolly and howler monkeys

The Callitricidae family consists of marmosets and tamarins. Even though their thick furs and long tails make them look larger, they are the smallest of all monkeys. Marmosets are the smallest monkeys, but all the monkeys in this group range from 5-32 oz. This monkey family is least like other monkeys. They have claws instead of nails on all their fingers and toes except for their big toe. Other differences include the inability to change facial expressions the way other monkeys do. Babies are usually born in pairs rather than single births as in other monkey groups. They also lack the opposable thumbs that are prevalent in other monkeys.

Groups of this type of this type of monkey are typically smaller, usually only five or six animals in a tribe, with both the male and female animals involved in care of the young. Male animals will often carry the babies around until feeding time when they are handed to the mother. Male members of the tribe are very involved with the young and will groom, comfort, protect, and even play with the offspring. A tribe is generally composed of a male, female, and their young at different ages. 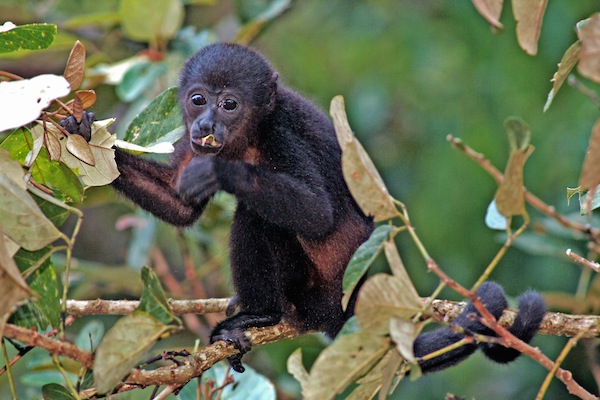 Of the New World Monkeys, the howler is the largest and also the loudest in the world. All the monkeys in this group are traditionally tree monkeys, using them to travel, live, protect themselves, and find food. The night monkeys stand apart in that it are the only nocturnal monkeys in the world. All other monkeys and humans, of course, are diurnal, making them capable of operating both during the day and night.

Unlike the Old world monkeys, Cebidae monkeys have nails on all their fingers and toes. Capuchin monkeys have been used for entertainment for a long time, and now also help the physically disabled because they are not only very dextrous, but also highly intelligent and learn fast. In the wild, they’ll collect nuts, dry them in the sun for a few days, and then crack them open with rocks. Mosquitoes can be a problem during the rainy season, so they will crush millipedes and smear them on their fur as a natural repellant. Other intelligent actions include using sticks to get insects out of small cracks, or using rocks to dig up plants to eat.

Tribe size in this group varies from the smaller groups of night monkeys to the large tribes of squirrel monkeys, which can grow to five-hundred animals. The Atelidae group is less monogamous and often one male will dominate a small group with all the females under his care and breeding from him. Larger groups will have up to 40 adults, with a clear hierarchy of the dominant males. The calls of the howler monkey can be heard miles away if the wind conditions are right. These calls protect the group and defend territory.