The definition of monkeys is any primate that is not human or ape. Monkeys are divided into two subspecies: Old World Monkeys and New World Monkeys. Old World monkeys are found in Africa and Asia, while New World monkeys live in Central and South America. In general, monkeys can be recognized because they have tails, while apes do not. However, this isn’t always the case and some monkeys have been incorrectly labeled as apes.

There are currently about 260 living species of monkey, with more species in Brazil than any other country. The Amazon basin is home to over 80 species with new ones being discovered all the time. The Democratic Republic of Congo currently has the second largest amount of species, and the most in the African continent. In many areas, monkeys are being threatened by extinction due to deforestation and the need for people to use land for crops and pasture lands. In some areas, monkeys are considered pests because they eat crops or food intended for cattle.

Monkeys are highly intelligent animals, learning and adapting quickly. Some use basic tools and many can be taught to obey basic commands. Some monkeys are used in entertainment, by doing tricks, performing, etc. However, monkeys can also be used to help humans. One example is their use in helping quadriplegic persons to perform everyday tasks, such as switching on lights, fetching objects, feeding, and even personal care.

Monkeys eat a variety of things and are not limited to either only herbivore or carnivore diets. Most monkeys eat fruit, nuts, leaves, berries, eggs, and small animals, including spiders and insects.

The largest monkeys are the mandril monkeys, with a male getting to be up to 3.3ft long and can weigh up to 79lb. These colorful monkeys live in areas of Africa and are closely related to baboons. The tiny pygmy marmoset, which is an Old World monkey, is the smallest of the species. It can be as small as only 4.6 in with a 6.8 in tail. This adorable monkey weighs only 3.5 oz and is sometimes kept as a pet, though it doesn’t always adapt well and should be left in the wild. 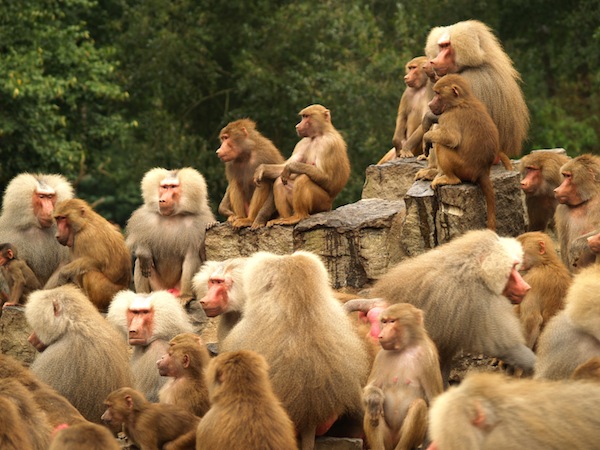 Communication among monkeys is something that has been studied extensively. They use a number of ways to communicate, including body movements, sounds, and facial expressions. These communication methods extend farther than just mating, but express affection, anger, danger signals, and contribute to the social order of things. The loudest of the monkeys are howler monkeys, which can be heard up to two miles in forested areas and three miles in open spaces.

There seems to be a clear hierarchical system in many monkey species, with a dominant male in charge of a tribe or troupe, as a group of monkeys is called. Some species have nanny groups where female monkeys take turns caring for the young. While many monkeys live in trees, some do travel by land, some creating new nesting grounds as they go. Tribes of monkeys can go into the hundreds, with female monkeys usually reproducing seasonally—one baby is usually born at that time.

Physical features are similar in most monkeys, with forward set eyes, and similarities in rumps, cheeks, and noses. However, Old World Monkeys and New World Monkeys show differences, especially in facial features. Most of the New World Monkeys are seen having the prehensile tails, that means they can use their tail as a fifth limb, enabling them to use it for climbing and balance. Old World Monkeys had either very short tails or non-prehensile tails. All monkeys use their feet as well as their hands for climbing and balance and have thumbs, which they use to open fruit, use sticks as tools, and can be quite dextrous when needed.

There is a lot of debate as far as using monkeys for research. Because the species is similar to humans in many ways, testing on monkeys is widespread, with hundreds of thousands of monkeys being housed in research facilities. Animal rights groups argue that the testing on monkeys is inhumane and unnecessary. Using monkeys for entertainment is also debated, as the monkeys do show emotion and often appear unhappy or angry with their masters. In some places, such as India and other areas where monkeys run wild, they are considered a pest because they can be dangerous to humans. They can be taught to steal and will often harm people in the quest for food or shiny objects they consider valuable.

Several religions feature the monkey, though it’s usually associated with mischief and quick-wit. Mythology, especially in India and China, features the monkey, leading in some worship of monkey gods.