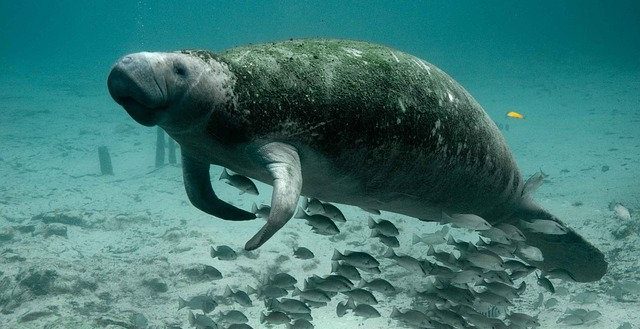 Dugongs are shy creatures that have long been of interest to scientists and people alike. And the way we talk about them, they might as well be mythological creatures. Just when we think we can prove the “existence” of dugong in one area, it ends up being speculation instead of a hard fact.

Fortunately, though, we have enough information to locate their general migration areas.

What is a Dugong?

Dugongs are the cousin of manatees. They look similar but have a district dolphin-shaped tail and live in different environments. Dugong lives in saltwater, making them marine mammals. Dugongs enjoy grazing the day away on seagrass in shallow coastal waters.

Dugongs tend to live and migrate around Oceania, particularly in the shallow waters of the Indo-Pacific areas. There are Dugong populations in Bunaken (Indonesia) and Moreton Bay (Australia), but we can’t seem to get ahold of these underwater mammals.

However, despite their general elusiveness, we’ve learned some fascinating things about these sea creatures and their migration patterns.

The Migration Pattern of Dugong

From what researchers have learned, dugongs move from the north coast of Indonesia and migrate towards Manado and Tana Toraja. After that, they return to parts of eastern Indonesia, such as Bintan Island, Seram Island, Temate Island, and the Anambas Islands.

Dugong-related goods have confirmed this migration pattern. In Manado and Tana Toraja, people harvest dugong products such as meat (bogor) and oil (balai).

Still, despite this information, the migration pattern is mostly uncertain. We can be sure that there are three main groups of dugong: one at Manado and Tana Toraja, one in Bintan Island and Seram Island, one at Anambas Islands.

What Can Cause the Dugong to Migrate?

Experts speculate that the sea current is one factor that causes dugongs to migrate. However, there is no evidence proving this theory.

What’s not a theory is that researchers are finding fewer dugongs than before in the areas we’ve mentioned. No one knows why, but it is probably due to overfishing and problems with their habitat. Poaching by anglers who use nets and poison can push these creatures out of their homes.

The dugong population in Borneo and Sulawesi is still a mystery to researchers. However, a study by the Borneo Research Institute indicates that there are still populations there. The researchers found dugongs swimming using underwater camera traps.

The same research found that the number of dugongs near reefs is greater than on sand flats. It’s likely due to the fact that there are more seagrasses in these reefs.

If you look for Dugong, you can find a small group at Bunaken Marine National Park (Indonesia). Multiple reports have confirmed the existence of dugong in the area. Bunaken National Park is currently being preserved and protected, as conservationists and marine biologists hope to find more dugongs living in the area.

Gorontalo Togian Islands have been confirmed to host these marine creatures. Dugongs are known to stay in this area in groups, and it is also a place where they can be seen coming up for air near the water’s surface. There is a research station to study them close to these islands called the Dugong Research Centre.

Migration Near the Philippines and Indonesia

Wakatobi National Park is famous for the large number of dugongs that live in this protected area. There are often sightings reported, but there have been no confirmed reports yet as it is difficult to find out whether the sightings are real or not.

In the Philippines, there were sightings of a dugong near Nalusuan Island, but it was never confirmed. It is only known from the local folklore.

Dugong Migration and Population in Australia

Dugongs can be found in Australia, especially in Moreton Bay and Hervey Bay. These areas are being preserved to conduct studies for conservation and their habitats.

Moreton Bay is home to about 3,000 dugongs, and 1/3 of them are found in Hervey Bay. This also becomes a tourist attraction for people who go there to see these marine creatures.

What Is Being Done to Protect Dugongs and Their Migration Areas?

Unfortunately, we are not doing much to protect dugongs. Various governments have some projects, but they are not addressing the main concern. This would be a lack of food sources for dugongs in Port Phillip Bay, as this is where most of them congregate every year to breed.

We need to find ways to make it possible for the dugongs to feed on seaweed and algae, their natural food source. Unfortunately, for animals like dugong, this is a distant dream at the moment. It will remain so until someone champions the cause of these wonderful gentle creatures.