The Mekong Giant Catfish is often mistaken for a type of shark in the water. They can be very large – up to 10 ½ ft long and with a weight of up to 660 pounds. It is considered to be the largest freshwater fish in the world.

They have eyes that are very low set on the face. Barbels are present on the juveniles. However, as they get older and they mature those will disappear.

There is a great deal that experts still don’t know about the life of the Mekong Giant Catfish. Many of the behaviors that it takes part in remain a mystery for it. They aren’t believed to be aggressive in terms of behavior. However, they are known to be very powerful. They do migrate a large distance annually. They cover long stretches of the river as they need specific types of environments for spawning and breeding. 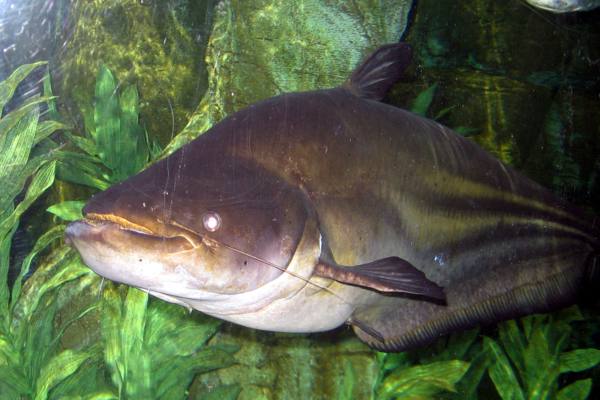 When the Mekong Giant Catfish are young they will dine on various forms of zooplankton. When they are about 1 year old they will start to change their diet and consume lots of algae. They also consume plants from the bottom of the water. They spend a great deal of time consuming food as they need volumes of it to meet their nutritional needs.

The Mekong Giant Catfish is considered to be Critically Endangered at this point in time. It is believed that in the past 15 years they have lost at least 80% of their habitat. There are efforts in place to help them but many worry that it is too late for them to get their numbers high enough in the wild. There are bans on catching this fish in various locations but the laws aren’t enforced so the process of taking  them continues.

With that in mind, the direction has changed to work on helping those that are thriving in the wild to reach the age of maturity. There are advocates that roam around the fishing areas. They are quick to report anyone that is taking a Mekong Giant Catfish but if the authorities aren’t willing to act fast then it may not be something that helps.