Many humans are upset when they see a manta ray due to the way its body looks. They worry that it is dangerous and that it will harm them. Many people know that they are related to the sting ray, but they don’t have the same dangerous venom.

A big part of that problem has to do with movies that came out in the early 1930s. They portrayed the manta ray as something to fear. Very few people today realize just how gentle they can be. There are some cultures such as the ancient Peru Moche that held the manta ray as being sacred. Their early culture includes many pictures and statues of them.

If you do come into contact with manta rays, it is best not to touch them. While they won’t pose any threat to you, the opposite can occur. They can develop various types of lesions from lots of touching. This has occurred with divers touching them, and the manta rays lose the protective layer of mucus and then they are very vulnerable to disease and problems with parasites.

There is absolutely no record of any human being harmed by one without being provoked. When someone is harpooning, the manta ray is stuck in a net, or they are diving then they may accidentally come into contact with humans with great force. Due to their size, they can be quite a forceful hit.

There are some locations where the manta ray is intentionally hunted. Large fishing nets are placed in the water to catch them. They are prized for their delicious tasting meat. There is also money to be made for selling the hide which is similar in texture to sandpaper. The liver is also full of rich oils that can be used for a variety of purposes. Most of this type of use takes place around Japan. 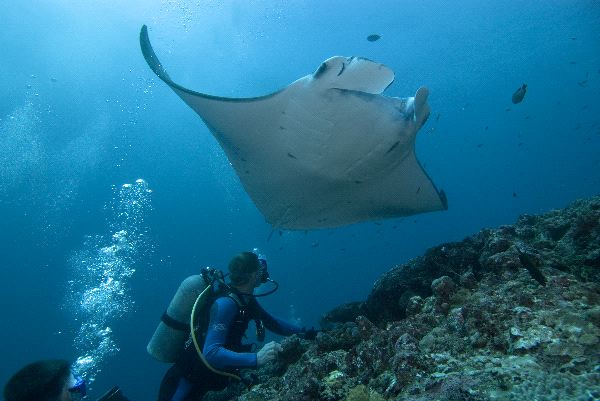 There is so much about the manta ray that humans still don’t fully understand. For example, do they sleep? Does one part of their brain shut down so that they can rest since they always have to be moving? Another pressing question is why the mothers go to shore to have their pup but then leave them rather than care for them.

The fact that the manta ray doesn’t do well in captivity is also something to question. Even when the circumstances are created to replicate their natural environment, it isn’t enough for them to be able to survive for more than a few hours. There are theories about such questions, but there is still a great deal more of research that has to be done in order to confirm or discredit them.

There have been some myths about humans in trouble in the water being saved by the manta ray. However, there is nothing to confirm any such stories. They are isolated creatures and while they aren’t afraid of humans, they tend to move to a location where they aren’t in the same area as them.

As a tribute to the manta ray, Sea World in Orlando opened up a new ride in 2009. This is a flying roller coaster that is designed to imitate the movements of the manta ray. There is also a great exhibit on display in that location. By the end of 2012, the same type of exhibit will be offered at the San Diego Sea World location. There are plenty of organizations out there that promote education about the manta ray. They encourage humans to take care when they are in the water such not polluting the water and not being tempted to touch or ride any manta rays they may come into contact with.