The size of the manta ray is what determines when they are mature for mating. The females are ready to mate when the disc width is about 16 ½ feet. For the males it is when that disc width is about 13 feet. This growth means they mate usually between 3 and 5 years of age the first time. The growth rate for them differs by location and food sources, and those that live in the tropical waters seem to mate at a younger age than those that live in the oceans.

Mating can occur any time of the year, as long as the basic needs of the manta rays are being met. Too much stress can cause them to not take part in mating. As long as they have enough food and they are in water that is warm enough for them, they should be taking part in such activities. Pollution, noise, and other human contributors can increase stress though and that will reduce the chances of them mating.

Almost all of the life of the manta ray is spent living in isolation. The most time they spend with each other involves the courting and mating process. There is plenty of speculation that lots of the diving, swimming, and mimicking behaviors when there is more than one of them around has to do with the courting process. It is believed that such behaviors of mirroring each other is part of how they select their mates.

The male seems to be the one that initiates the chase, and then the female gets to decide if she would like to respond or not. The chase can last for up to an hour, and there could be more than one male in pursuit of a single female. Many experts believe that the full moon is what triggers the mating for the manta rays. However, there are other variables that have to be considered as well. 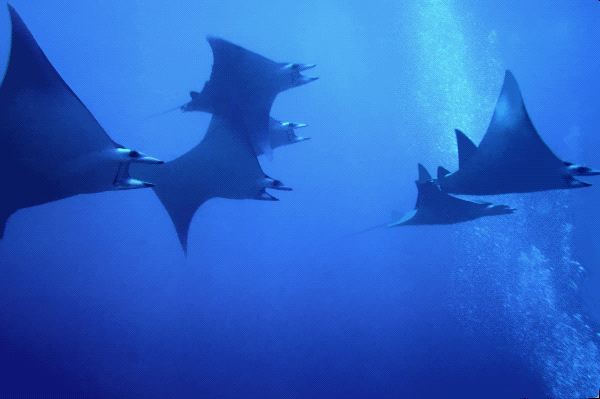 Mating occurs close to the surface of the water. The male will bite the female during mating, but it isn’t going to cause pain for her. However, this accounts for many of the scars found on the females. As they get older, the number of scars increases and so does the contrasts of them with their dark body coloring. They male will swim off and no longer be involved with the female as soon a mating is done.

After successfully mating, the females will have eggs in her body that start to develop. They will be in her body for about 1 year, and hatch internally. There is usually only one pup born at a time. The mother will give birth to the young in a shallow location. The young will remain close to the shore and take care of their own needs from the start. The mother will leave the area soon after the pup is born.

The pup is usually about 20 pounds when they are born. Being close to the shore, they have a high mortality rate due to various predators. Mature females will typically mate once every two years. It is believed that this break has to do with allowing the female to build her body back up to have enough energy and vitality for the next pregnancy.

There is still a great deal that isn’t fully known about the reproduction of the manta ray. Since they live in various locations and they don’t do well in captivity, observing them in depth has proven to be difficult. However, it is believed that their behaviors are often very similar in nature to those of other types of rays.