The Mandrill is an Old World monkey and it is considered to be one of the biggest, in fact, the biggest of all monkeys in the world today. This type of monkey is by far the largest but it does closely resemble another member of the monkey family. The Mandrill is considered to be related to the baboon family but strangely enough, the Mandrill monkeys are in fact reclusive and shy primates. This might seem odd considering how large these animals are but they are very shy but amazing animals.

The Mandrills are usually found in the rain forests of Africa.  Throughout countries such as the Congo, Gabon, Cameroon and Equatorial Guinea can usually find the mandrills living within their tropical rainforests.  Though, the mandrills are also able to live in many of the forest savannah mosaics that can be found throughout Africa and their rainforests.

The Mandrill is considered to be a very colourful animal, if not the most colourful primate in the kingdom; because it will have dark grey or olive green pelage.  It also has yellow and black bands with a white belly.  This primate strangely however, is not going to have any hair on its face; it’s hairless but it will have a muzzle which is long.  It will have distinctive features that make it stand out as a mandrill; because it has a red stripe down the middle of the elongated nose and the blue protruding ridges also.

The mandrill’s nostrils and lips are red but strangely it does have a yellow beard as well as white tuffs all around it.  This is a very distinctive animal because it will have its features that make it stand out amongst many of the other primates out there.  Though, the genital parts of the mandrills are multicoloured such as purple, pink, blue and scarlet.  Though, these are very colourful animals and the males are going to be more dominant than the females – this is usually the case from almost all animals. 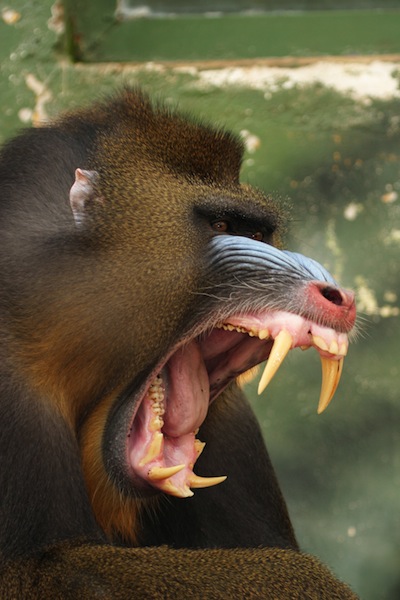 Some males can weigh up to around 120 pounds which is a huge amount to weigh when it comes to an animal. The males are going to be around 30-37 inches in size and the females can reach 22 inches to around 26 inches so there is a considerable different in size and weight.  Though, it is not the biggest monkey in terms of length but rather in weight.  The mandrill does have a more ape like structure than anything else because it is shorter with thick limbs, almost no toil and is compact in build with a lot of muscles. These mandrills can actually live anything up to almost 30 years, there have been some of these animals to have lived to as long as 40 years which is a tremendous age for a primate.

Where Do Mandrills Live?

Most mandrills are native to Africa, in countries such as;

They usually like to live in tropical rain forests and will live in troops; these groups are called hordes.  These troops are going to be ruled by a dominate male but will have dozens of different female mandrills and their young old.  Sometimes, they can be found to create troops which have a few males and females but still there will be only a dominate male that rules the group.  Some troops can have almost 200 members though these are rarities.

What Do Mandrills Eat?

However, the mandrills are a type of animal that is often hunted.  Some humans hunt them for bush meat and they are considered to be a delicacy in many parts of Africa.  The primates are going to find it becoming more and more squeezed in their habitats because of their rain forests being destroyed and more human beings moving closer to the animals. Though, they can be hunted by other animals including eagles, pythons, and leopards. 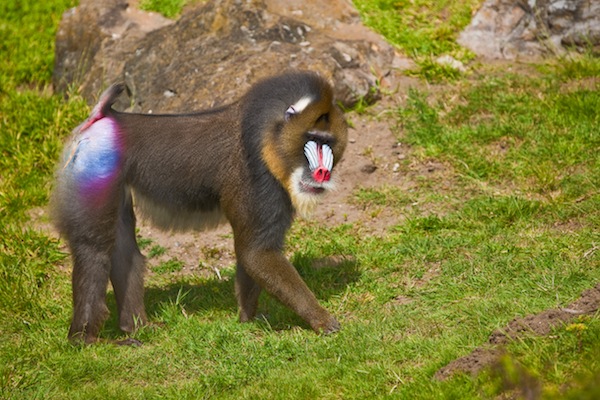 Mature mandrill with olive-colored fur and the colorful face.

When Do the Mandrills Mate?

Usually, the mating season for the mandrills is going to be between the months of June through to October.  However, breeding is only going to occur once every two years which is a little unusual for most primates. The males will guard the female when they are in heat and wish to mate; any male within the group will be free to mate with a female, however, only the dominate male will be able to sire children with the female. Though, during mating season, there can be many rifts starting leading to fighting which can be very serious and deadly on occasion.

The births will usually occur from the months of January to May; and in Gabon, most births will happen during the wet season – this is from January to March. It can take almost 400 days during captivity from one birth to another unlike in the wild where it can usually only take 170 days.  Though, the infants are going to be born with a black coat with pink skin.

The females are going to be the ones who will raise the young; though in some occasions, there will be other females who will help out to raise the young.  Males will leave their first group when they are old enough – about 6 years old.  Though, females and males both reach sexual maturity at different stages in their lives.  Mostly, the females reach maturity first and the males take longer usually to be sexually mature.

The mandrills are going to use a different variety of communication techniques. They can bare their teeth and be silent and they can also shake their heads and use different forms as warnings and as peace gestures. Many like to stare and slap the ground but some have been heard to be vocal; many can grunt and roar also.

However, more and more of these mandrills are at risk because of the deforestation many areas suffer.  This is causing their homes to be destroyed and it is causing more harm to these animals. Being hunted by humans can pose a bigger threat than from many of the other animals out there because humans like to use them as bush meat. They are considered as vulnerable animals today.