The manatee is no small creature that you are talking about. They can be from 440 to 1200 pounds when they are full grown adults. They can also be from 9 feet to 14 feet in length. The females are longer and heavier than the males of the same species. They have wide eyes, a short and wide snout, and a paddle like tail. They are brownish gray in color with spots of pink or white on the belly.

The manatee is an aquatic creature, and one that is very delightful in many regards. There are three species of the manatee but sadly all of them are considered to be endangered at this time. This is the result of environmental factors such as disease and temperature change in the water. However, it is mainly due to human factors including boating, fishing, illegal hunting, and pollution.

The body is very round, which often gives the impression that they have large reserves of fat. Yet they don’t and that roundness is the result of their stomach and intestinal tract. This is why the manatee must move to warmer areas if the water gets too cold. Otherwise, their body could go into shock and the additional stress can result in death.

The manatee is very social and they use their bodies to communicate with each other. For example, they use their flippers to embrace, to touch, and to soothe each other. There has been a great deal of research conducted on this. Observing them in the wild and in captivity has helped with understanding more about the degree that this influences the well-being of these creatures. They also use a variety of sounds to help them with communicating with each other. The cows often communicate that way with the young calves. 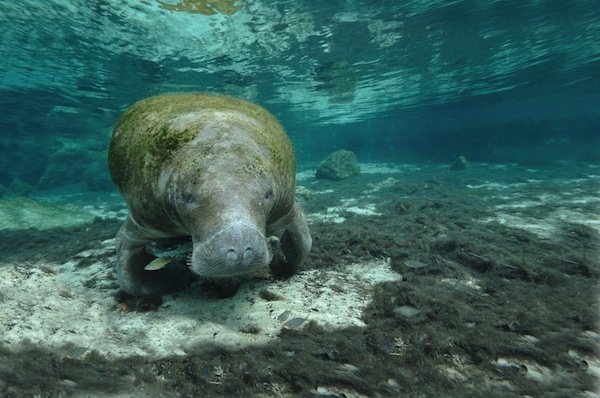 You will find the manatees living in the warmer waters that are shallow. Where you will find them depends on the species. They are found around West Africa, the Gulf of Mexico, and the Caribbean Sea. When food supplies are hard to come by or when the water temperatures are colder than usual they may migrate to ensure their needs can be met.

Their diet consists of only plants, so they are classified as herbivores. They can consume more than 60 different plants that have been identified. What they have access to can variety based on location and even the time of the year. They use their split lip and flippers to help them successfully manipulate the food.

They don’t swallow the vegetation whole, but rather use their molars to grind it before swallowing. In addition, all of the species of manatee will need to have access to fresh water to drink. Two of the species need to have such access on a regular basis.

Males are called bulls and they are mature for mating around 9 or 10 years of age. Females are called cows and they are able to start mating around 3 years of age. The offspring are called calves and they are born about 1 year after mating occurs. Then they are nursed by their mother for up to 18 months. The bond between the mother and the offspring is very strong and can last a lifetime. Mating can occur any time of the year for the species that live in the warmer climate locations. The young can be from 60 to 70 pounds and from 4 to 4 ½ feet long at birth.

While there are plenty of theories about the evolution of the manatee, there is very little proof to give them credibility. Only time will tell if in the end there is enough scientific evidence and proof to back up any such theories. In the meantime, it certainly is interesting to examine the various possibilities.

The earliest known fossil remains of the manatee date back more than 45 million years. There is still plenty unknown about the evolution of them. The focus is mainly on their survival right now though instead of putting the pieces of the puzzle together regarding their past and their ancestry.

There are conservation programs in all regions and countries where the manatees live to help protect them. However, there is a lack of funding and manpower to really back up those programs and to make sure anyone that harms or kills a manatee is held accountable. Until such actions are put into motion, there will continue to be serious concerns about getting the numbers back up for them.

They do seem to do well in captivity, but the cost of hosting them in such an environment is very high. As a result, very few programs out there offer captivity breeding efforts. Instead, they focus on rehabilitating manatees that may one day have the potential to live in the wild again.