The manatee is considered to be endangered at this point in time. The leading reasons for this happen to be due to human actions. The destruction of their habit and objects in the water are prime problems. Compounded with environment issues such as temperature changes and disease and the numbers are dropping to a point where action has to be taken if they are going to survive.

The manatee shares its habitat in the water with humans. Yet that isn’t always a good mix due to factors that can harm or kill these animals. For example, the fact that there are so many boats in the water is dangerous. The manatees can get struck by a boat or they can get harmed due to the propellers on the mechanisms. Those that get struck may not die immediately from it. Yet the wound can easily become an infection that does result in their death.

Objects in the Water

Another risk to the manatee are the various objects in the water such as plastic. It is unreal how much of it and other debris are in the water due to human actions. They may get tangled up in such objects and that prevents them from their natural movements. Another problem for them is that they can swallow plastic and other items and that can damage their digestive tract, creating internal health issues for them.

Fishing nets have also created challenges for the survival of the manatee. They can get caught in them and then injured or drown. In some locations there are also problems with other fishing gear including specialized hooks. Most of the time, the issues are due to accidental concerns where fishermen and the manatee are in the same location at the same time.

However, there are also reports of them being heavily hunted illegally in some locations. Even though there are laws against it, enforcing such laws can prove to be very difficult. The money that is made from the manatee is often very high and that can be enticing to someone enough that they will take the risk of being caught. 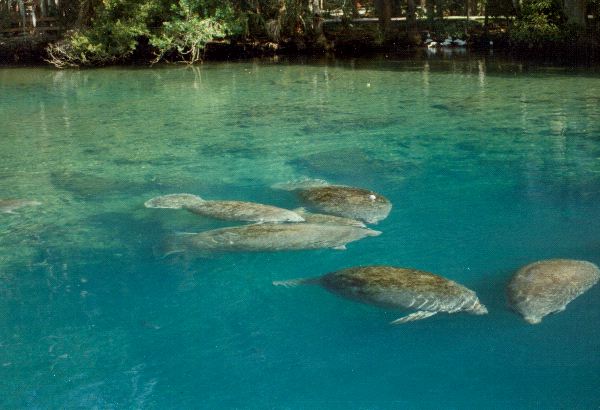 Group of Manatees in Aquarium

When the temperature of the water changes, that creates stress and other problems for the manatee. The changes can be due to natural disasters such as a hurricane. The colder water makes it hard for them to move around and to find food. The stress from the cold water could also result in them not eating or mating.

The manatee is also very vulnerable when it comes to different types of diseases. They can spread quickly from one to the entire group of them. Red Tide is a term used to describe the various algae in the water that can harm the central nervous system of the manatee.

All four of the manatees species are considered to be endangered at this time. There are efforts in place to protect all of them in every country where they live. Even so, it is hard to identify all of them and for enough protection to be in place. There are rewards for reporting anyone harassing or harming the manatees as a way to reduce such incidents.

Some conservation efforts include efforts to help sick or injured manatees. They include those offered by Sea World in California and in Florida. This also provides a great opportunity for others to learn about the manatee so that they will be more appreciative of them. Programs to raise money and also to get volunteers to promote eliminating pollution in the water are also part of the overall conservation efforts.