The Mako Shark is often called the peregrine Falcon of the Shark world, with reference to the way that the body is designed to be very effective for them. They are fast, they are able to conserve energy, and they are the fastest shark that has ever been observed. They can move at speeds up to 31 miles per hour for a decent amount of time.

The appearance of the Mako Shark is very unique and it helps it to be successfully identified rather than mistaken for other species of sharks. They snout of this shark is very pointed. They are dark gray or blue in color with white or cream coloring on the belly. The tail is more of a V shape and that helps with navigation as they move quickly through the water.

They range in length from 10 to 13 feet. Their location and food resources often play a role in their overall size. Full grown, this species of shark can be up to 1,260 pounds. Some of them have short fins and others have long fins. They have teeth that are very long and sharp with points. The teeth move into place to replace those that have been dulled or broken.

You will find Mako Sharks living in offshore waters that are tropical and warm. They tend to live close to the surface of the water so they are often seen by people. They can live at depths up to about 500 feet below the surface of the water. While the majority of them live along the Gulf of Mexico to Argentina across the Western Atlantic, they can be found around the world. They tend to be seen often around islands and inlets.

The warmer temperatures are very important to the survival of the Mako Shark. They tend to live in bodies of water that are at least 61 degrees Fahrenheit. They will move often though to find mates or for food. They will also move out of bodies of water that start to cool off. They are often migratory in order to stay in comfortable conditions that are ideal for them to thrive. They average about 1,500 miles annually for migration purposes.

The number of them has been greatly diminished though due to humans hunting them in many locations for their meat, hide, and the use of the fins. Sometimes, they are also hunted due to the fact that they are viewed as being a very aggressive species of shark that humans have to be careful of in the water.

This shark species is known to attack humans, and that has made many people afraid of them. However, most experts take the stand that they aren’t trying to attack humans directly. Instead, they believe that they are mistaking the humans in the water for their normal food sources. Many fishermen that have caught the Mako Shark by accident are worried that they will be harmed when they attempt to set them free. There is still a great deal that isn’t known about the behaviors of this shark species. 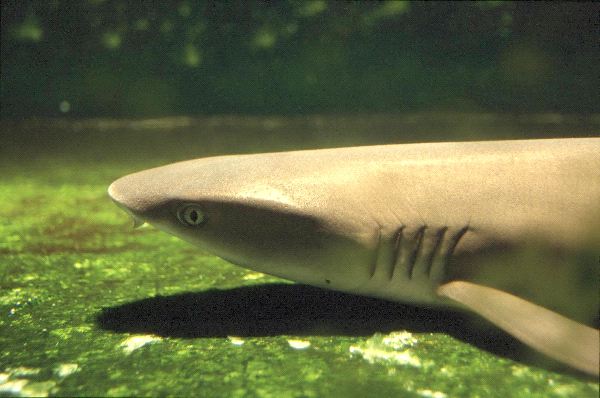 The Mako Shark is very aggressive in nature when it comes to their food. They are very good at hunting due to the fact that their body temperature is usually up to 10 degrees higher than that of the water they are in. There are plenty of types of food sources for them but it varies depending on location.

Their diet commonly includes sea turtles, seals, small sharks of other species, swordfish, mackerels, bonitos, and tuna. They are opportunistic feeders which mean that they will eat large amounts of food daily when it is accessible to them. They know that it could be a while before they get to eat that much again.

There isn’t exact information known about when this species of shark reaches the age of maturity. Experts believe it can range from 8 years to 29 years in males and from 18 years to 32 years for females. It is believed that stress, living conditions, and even water temperatures can affect the age of maturity for the Mako Shark.

They have a long span between mating seasons too. For example, a female will usually mate about 1 ½ years after she gives birth. This would mean she is having offspring approximately every 3 years. This makes it very hard for their population to increase.

The Mako Shark is one species that gives birth to live young. The female will develop embryos in her body that will remain for a period of time that ranges from 15 to 18 months. In the latter part of the winter or the early part of the spring, the young will be born. Typically, there are from 4 to 18 pups born. They are approximately 28 inches long at birth.