The Magellanic Penguin is well known for its design. It is closely related to the Galapagos Penguins, African Penguins, and the Humboldt Penguin species. This particular species of penguin is named after Ferdinand Magellan, and explorer. He first saw these penguins while exploring in 1519 and drew pictures of them.

These are medium sized penguins that can be from 24 to 30 inches tall. They weigh from 6 to 15 pounds. The males are just a bit larger and heavier than the females. They feature black bodies with white on the belly region. They have two black bands that are from the head to the breast. The lower band looks like an upside down horseshoe. The face features white that runs from the eye around the ears and then to the chin and down to the throat. Such facial features become more distinct as the penguin reaches the age of maturity.

The Magellanic Penguin is found around the Strait of Magellan which is where their name comes from. This is a cooler part of Southern Chile. They also migrate for breeding so they are seen around Brazil, Rio de Janeiro, Falkland Islands, Argentina, and Chile. They tend to live in temperature areas of South America. However, they sometimes move into tropical areas near the ocean. They may travel long distances in order to find enough food for survival.

Swimming is very easy for the Magellanic Penguin due to their wide span of the flippers. They can move fast through the water without it taking very much energy for them to do so.  With the exception of mating and molting, they spend most of their time in the water.

Molting takes place in March, and the penguins will stay on land for several weeks until it is complete. This process involves the old feathers being pushed out by the new feathers. The penguins will fast during this period of time. They will have layers of fat stored that they will survive on until they can return to the water in search of food.

While all penguins are vocal, this species seems to have a louder sound and different calls than others. They are often referred to as making sounds very similar to those that a donkey makes. The males seem to make the most sounds in order to attract mates. This species is also more territorial than other penguins. They often use the vocalizations to secure their territory from possible invaders. 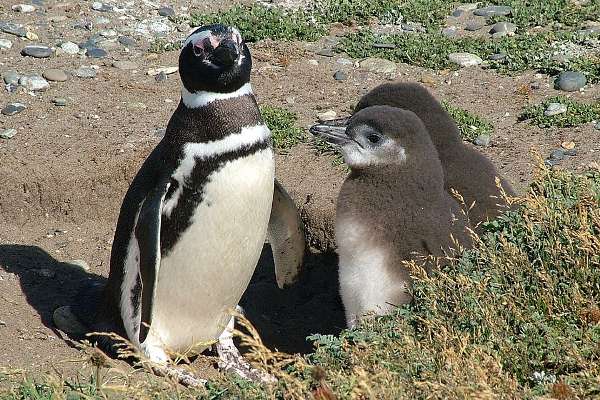 The Magellanic Penguin finds plenty of types of prey in the water. This includes squid, sardines, krill, and crustaceans. They are able to rely on glands in the body that will excrete any extra salt from the body. They swallow their prey whole, and rely on the spiny elements in the mouth and on the tongue to help them slide down the throat.

They can dive up to 75 meters in order to find food. They tend to dive less than half of that distance to get food most of the time. They reserve the deeper dives for when there are food shortages. They have to spend lots of time eating so that they can build up the necessary fat for molting and mating. During those periods of time, they will remain on land and not hunt for food.

The males come to the mating locations first, and they will create a territory for their nests. It is common for males to fight over location. When the females arrive, they will pair up with the mate they had the previous year when possible. They use distinct calls that they can identify as being from their mate to find each other. For the newly mature, the males will use vocalization and displays to encourage females to mate with them.

They will create their nests around grassland areas where there are also cliffs. They often use the tussac grass areas as they can burrow with ease in such terrain. The pair will take turns incubating the nest while the other goes to find food. The incubation takes about 42 days. The parents will trade off about every 10-15 days. There will be one or two eggs, but usually only one chick will survive.

Once it arrives, the parents will bring food to it until the adult feathers come in and it can go to the water to find food on its own. This takes about 30 days and the parents will switch off care duties and bring back food every couple of days. These young penguins have one of the highest mortality rates of all species. It could be due to them building nests so closely to the shore. With the right conditions, the Magellanic Penguin may be able to live up to 30 years in the wild.